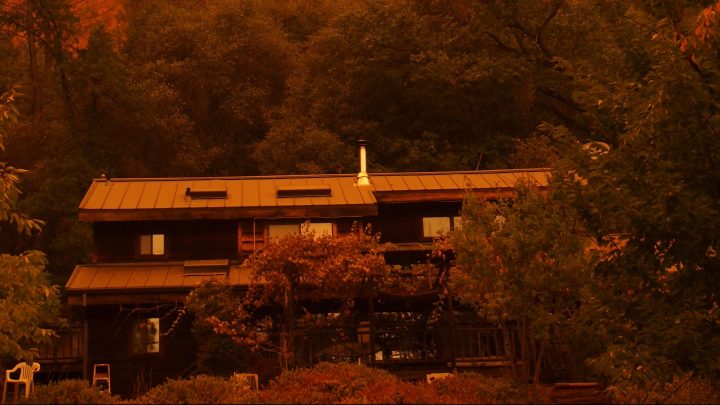 In the mid-1980s, Jim and Ann Pesout fell in love with 10 acres of forest in Northern California’s Calaveras County. They bought the land and started building a house.

“It took us two years. We physically pounded nails and built the house,” Ann said. “Our kids grew up there. We had a pretty happy life there.”

Then one day — almost 30 years later, in September 2015 — Ann was at work, Jim was at home, “and someone called Jim and said, ‘Get out!’” Ann said. “And he looked up and saw there were flames behind the house and said, ‘OK, I should pack.’”

This wasn’t the first time they had to evacuate because of a wildfire, so they weren’t too worried. But this time was different. This fire, the Butte Fire, was huge and fast-moving, and it ended up destroying more than 500 homes. Including theirs.

“We had a redwood deck around the outside of the house. And we had cedar siding, which we had just oiled,” Ann said. “So …”

“Our house was a big tiki torch, is really what it was,” Jim said. “And the fire came up and lit it up.”

For a while after the blaze, the Pesouts weren’t sure what they wanted to do. Eventually, they decided to stay in Calaveras County and build another house, but on a different plot of land.

The new house is different too. There’s no wood on the outside this time. It’s surrounded by a concrete patio. It has a slab foundation. The chimney is rock. There are no vents into the attic. And there are no trees within 10 or 20 feet.

A lot of those design choices weren’t really choices — all new houses built in fire-prone areas of California now have to meet strict building codes, designed to make them less likely to burn.

Since 2008, the state has had rules about keeping a certain amount of space around homes clear of trees and brush, rules about what materials people can use for their roofs, “rules for siding, rules for vents, rules for decks and fences,” said Judson Boomhower, a professor of environmental economics at the University of California, San Diego.

Those requirements have made a big difference, according to a study Boomhower co-authored that was published by the National Bureau of Economic Research. It found that newer homes in California that are built to code are 40% more likely to survive a major wildfire.

“These codes have really clear benefits in terms of improving the probability that a home will survive a wildfire,” Boomhower said. “There’s also pretty clear benefits to your neighbors if you live in a dense area.”

Only about 1 million homes in the state have been built since those codes went into effect, though, according to Dan Dunmoyer, president and CEO of the California Building Industry Association.

“That means that there’s approximately 13.5 to 14 million California homes that have not been built to these safety codes,” he said.

California does not require people who own older homes to do any kind of retrofitting to bring them up to code, and few are doing it voluntarily.

“Retrofitting homes is going to be more expensive than building a home from the start,” said Kimiko Barrett, wildfire research and policy lead at the nonprofit Headwaters Economics.

Getting significant numbers of homeowners to bring existing homes up to code would likely require a mandate.

“Voluntary measures alone will not get us to the level of mitigation we need,” Barrett said. “But having said that, you can’t do that without providing homeowner subsidies for those homeowners to actually pay for those costs. Because we do know that not everyone can afford what it’s going to take to meet these mitigation measures.”

In the absence of mandates and direct subsidies, Amy Bach, co-founder and executive director of the nonprofit United Policyholders, said there is a way to get more people to make upgrades voluntarily: giving them discounts on insurance.

Until recently, few insurance companies in California were doing that. Now, a growing number are starting to. That can be a real incentive for homeowners, especially in high-fire-risk areas where insurance premiums have skyrocketed.

“In a perfect world, people would do everything they could to make it less likely that their house was going to be destroyed,” Bach said. “But in this world, where people are typically on limited budgets, generally there has to be some trigger — either a mandate or a rebate or a discount — that gets people to spend money on something that normally would not be a priority.”

More than five years after the Butte Fire burned their house down, Jim and Ann Pesout moved into their new home just about six months ago.

It took a long time to build, and meeting all the fire-related code requirements was expensive.

“But in our minds, it’s totally worthwhile,” Jim said. “I’m actually glad that California has all of these regulations that required that we build it in a certain way so that we will be safe in there. They did us a big favor. It’s much easier to sleep at night.”