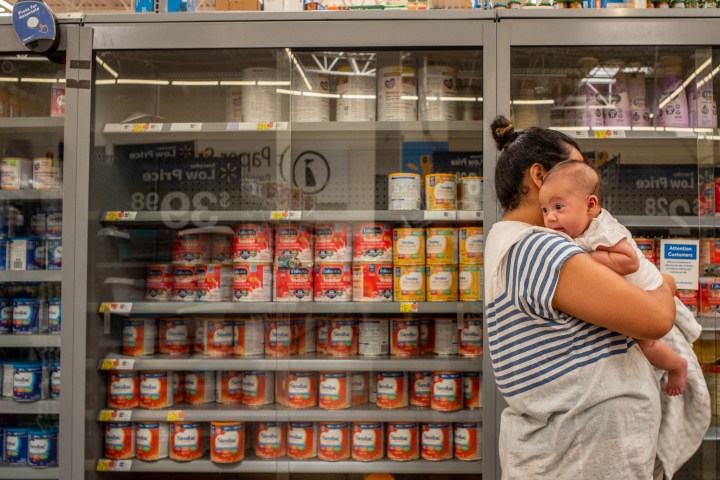 COPY
The U.S. imposes tariffs on formula imports. Instead of lifting them, the Biden administration is trying to simplify the FDA approval process for certain foreign producers. Brandon Bell/Getty Images

The U.S. imposes tariffs on formula imports. Instead of lifting them, the Biden administration is trying to simplify the FDA approval process for certain foreign producers. Brandon Bell/Getty Images
Listen Now

Baby formula maker Abbott Nutrition said its factory in southern Michigan has reopened. It was shut down in June due to flooding, and before that, the plant was closed for months after a voluntary recall and a Food and Drug Administration probe into the formula made there.

That shutdown led to a shortage of formula in the U.S. and brought attention to the challenges facing foreign manufacturers who might want to enter the American market.

In the last four weeks, families have had many fewer choices in the market for baby formula, according to Krishnakumar Davey with market data firm IRI.

Almost all the baby formula bought in the U.S. is made here.

“Imports currently satisfy less than 2% of the demand within the United States,” said Erica York, a senior economist at the Tax Foundation. “And the rest is normally met by domestic producers, which is a very concentrated market.”

There’s now a focus on expanding the market. That includes making it easier for foreign companies to get FDA approval to sell their products here.

“So providing that, you know, if it’s good in this country, it’s good in our country, type of arrangement could help increase access for foreign manufacturers,” York said.

The U.S. also imposes tariffs up to 17.5% on formula, which deters imports, according to Gabriella Beaumont-Smith with the Cato Institute.

“Baby formula is a necessity,” she said. “There shouldn’t be any kind of import tax on formula at all.”

There are a couple of bills before Congress that would lift the tariffs, at least temporarily.

That isn’t the focus for the Joe Biden administration. Instead, it’s concentrating on making it simpler for certain foreign producers to get FDA approval.

“These high-quality producers are going to have a pathway towards staying here in the U.S. and get the time they need to meet all of our normal regulatory requirements,” said Sameera Fazili, the deputy director of the National Economic Council.

Fazili said it’s a good moment to figure out how to diversify, which would be helpful for both ensuring a reliable formula supply and providing more choices for families.