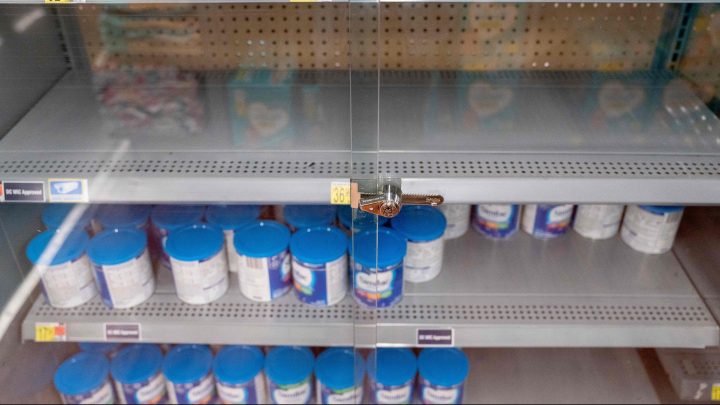 COPY
When you only have a few companies in the country that make something, shortages are one of the risks, says Brian Dittmeier of the National WIC Association. Stefani Reynolds/AFP via Getty Images

When you only have a few companies in the country that make something, shortages are one of the risks, says Brian Dittmeier of the National WIC Association. Stefani Reynolds/AFP via Getty Images
Listen Now

It’s getting harder and harder to find baby formula in many parts of the country, which has a lot of parents increasingly stressed. Nationwide, 43% of baby formula is out of stock right now according to a company called Datasembly that’s tracking supply in real time.

There are many factors at play here, as with any shortage, and supply chain issues these days are only making it worse. But things really started getting bad a couple of months ago after Abbott Nutrition, one of the main companies that makes formula, had to recall several of its products over safety concerns and shut down one of its main manufacturing plants. That plant is still closed.

Abbott and just three other companies — Mead Johnson Nutrition, Nestlé USA and Perrigo Co. — produce almost all of the baby formula in the United States.

“It’s been this way for decades,” said Brian Dittmeier, senior director of public policy at the National WIC Association. “We’ve had large manufacturers that have consistently commanded the market space and edged out the competition.”

When you only have a few companies that make something, this is one of the risks, he said.

“You wind up with a situation where one plant closing for the matter of a few weeks has this ripple effect throughout the entire industry.”

It’s particularly dire with something like baby formula that is a necessity and that doesn’t have substitutes.

“There are many infants that can only tolerate one or maybe two types of formula,” said Carri Chan, a professor at Columbia Business School. According to Chan, some parents can easily switch their babies to any brand of formula that’s available, but some can’t. They need specific kinds for health reasons.

“And so when there’s a shortage in that area, there’s not a possibility to just switch to an alternative,” Chan said. So far, U.S. companies have not been able to ramp up manufacturing quickly enough to meet the need.

“The formula supply chain is very similar to the supply chain of other products,” said Alla Valente, senior analyst at Forrester. There’s also another barrier to getting more supply on shelves fast, she said.

“In the U.S. we have restrictions on the import of baby formula,” Valente said.

The Joe Biden administration said it’s taking steps to make it easier to import baby formula from abroad as one way to help increase supply in the short term.