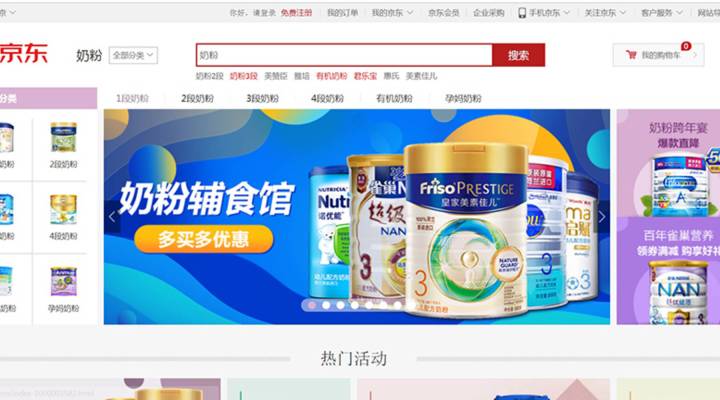 When Zhang Zheng gave birth to her son two years ago in the southwestern Chinese city of Chongqing, she didn’t have enough breast milk. Zhang, a fertility doctor, said she had to turn to infant milk formula. While she was not familiar with baby formula, there was one thing she was certain about.

“[My husband and I] did not consider buying Chinese brands,” Zhang said.

According to Euromonitor International, the top four infant formula firms in China are all based in the U.S. and Europe, accounting for 40 percent of the market. They are: Wyeth; Chicago-based Mead Johnson, now owned by British consumer goods firm Reckitt Benckiser; Danone’s Nutricia from France; and the Netherland’s Royal FrieslandCampina’s Friso.

It has been a decade since six babies died and some 300,000 more fell ill from kidney stones and other complications after drinking Chinese infant formula contaminated with melamine. The industrial chemical is used to make plastics and fertilizers. Melamine-tainted ingredients from China were also found in pet food in the U.S. in 2007 and triggered a wide recall.

In 2008, the dairy supply couldn’t keep up with the demand and melamine was added to make watered-down milk pass quality checks. The tainted milk ended up in infant formula sold by one of China’s most trusted brands, Sanlu Group.

“My niece also drank Sanlu milk formula at the time. She had a physical check-up and fortunately she did not have any problems,” Zhang said.

Several factors, including inaccurate advice from health workers and aggressive marketing by infant milk formula producers, have kept the breastfeeding rate in China among the lowest in Asia. According to UNICEF only 21 percent of babies in China were breastfed exclusively for the first six months in 2013. In the U.S., it was 16 percent.

At the same time, a string of baby food safety issues in China has pushed families to buy more foreign brands.

Four years before the melamine scandal in 2008, at least a dozen babies died of malnutrition in central China after being fed fake milk powder.

When Sanlu found melamine in its milk supply, it continued to sell the tainted milk for months until the scandal was exposed in the fall of 2008. Production only stopped after Sanlu’s New Zealand partner, Fonterra, blew the whistle. A government investigation at the time found smaller traces of melamine in 21 other infant formula producers in China. U.S. authorities issued an “import alert” for Chinese-made food products.

Then in 2010, milk formula from Chinese brand Synutra was suspected of causing early puberty, including the growth of breasts, in at least three infant girls in central Hubei province. A government investigation found no link between the two, but China’s consumers were on edge.

“After 2010, Chinese consumers all turned to imported and expensive milk powder. They believed that the higher the price, the safer the product,” Song Liang, deputy director of Liaowang Institute’s dairy research center, said.

The probe had little impact on sales of foreign baby food brands. A grey market of daigou, or purchasing agents, thrived on bringing foreign products into China, even though the same brands are available for sale in the country. The prices were not necessarily cheaper, but some parents did not trust China’s supply chain and felt that direct imports of infant milk formula were safer. These purchasing agents caused shortages or rationing in at least half a dozen countries from New Zealand to the U.K.

This problem eased in 2014 when China approved cross-border e-commerce channels, where consumers could directly order products from abroad at a lower tax rate. The sale of imported infant milk formula via cross border e-commerce platform alone in 2014 was 6 billion yuan ($960 million), which is around $864 million at today’s currency exchange. That figure tripled in 2017 to 18 billion yuan ($2.6 billion), according to dairy analyst Song.

“The melamine milk scandal in 2008 was a painful lesson for China,” Song said. In an effort to boost consumer trust in Chinese brands, the government has made stricter rules.

“China has established a supervision system where you can trace the product to ensure the safety of baby formula,” Song said.

This January, China enacted a new regulation that cut the number of registered infant milk formulas from more than 2,000 to below a thousand to make the market easier for the government to monitor.

Song said some of China’s requirements are even more stringent than developed countries. He is optimistic that Chinese infant milk formula brands will continue to rebound, in part because a few of them are acquiring milk sources from abroad.

However, some analysts expect foreign firms to remain in the dominant position. According to Euromonitor’s Cecilia Yang, the baby food market, which includes infant milk formula, is worth 128 billion yuan ($18 billion) in China and is estimated to increase to 160 billion yuan ($23 billion) over the next five years, much of it driven by foreign brands.

“The continuous rising income levels of Chinese families [means they are] increasingly willing to spend more and more on their babies,” she said.

However, there are challenges ahead.

The baby boom officials expected after lifting the birth limit from one child per couple to two in 2015 did not happen. Births did go up according to China’s National Health Commission by 18.5 million in 2016 but that figure dropped to 17.6 million by 2017.

“After 2020 we predict that such positive effects from this [two-child] policy will gradually phase out,” Yang said.

Rather than bank on sales volume, firms are moving into more high-end infant formula, such as organic milk. According to Yang, this premium infant formula market saw a 30 percent growth in sales in 2017, compared to the average growth rate in the industry of 8 percent. Some infant formula makers are producing liquid infant formula that costs as much as 20 yuan ($3) per bottle, Yang said.

Wyeth has been selling a baby milk dispenser modeled on the profitable Nespresso coffee machine by its parent company, Nestlé. Since the firm counts China as its biggest market, Wyeth chose to set up its flagship BabyNes shop in one of the most affluent areas in Shanghai.

“Wyeth introduces its newest and best innovations to China’s market,” the firm said in a statement to Marketplace.

Back in Chongqing city, Zhang continues to feed her two-year-old Wyeth milk formula, which costs more than $40 for less than two pounds.

“Are imported products definitely better than China’s brands? Not necessarily, but when we don’t have a method to measure, we must listen to our friends and colleagues’ advice,” Zhang said.

So far, her friends and family have only recommended foreign infant milk formula.