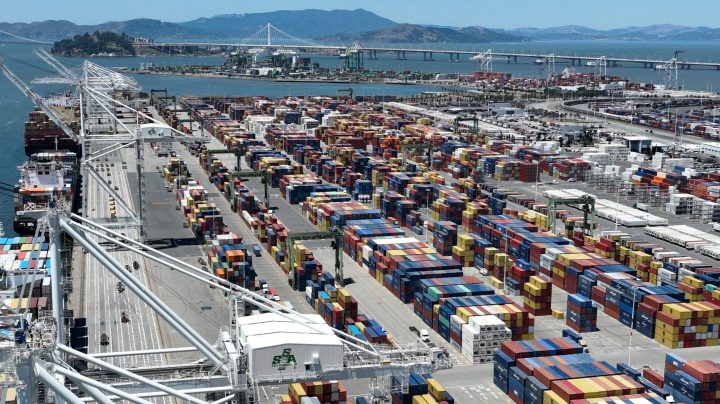 Remember when everyone was talking about clogged ports? We’re mentioning it less, but ports — like those in Los Angeles and Long Beach — are still working to smooth the flow of goods into and out of their facilities.

The Port of Oakland is frustrated with the length of time shipping containers are parked at its marine terminals, so it’s reducing the amount of days that containers can remain, from seven down to four, and considering new fees for containers that hang around too long.

Dwell time is how long a container sits around on a ship or at a port or in front of a rail line. And Oakland is not the only place where this so-called “vessel dwell time” is up.

“Ports are all about turnover, so you want to have containers and inventory turning through the docks as quickly as possible,” said Zac Rogers, who teaches supply chain management at Colorado State University.

Dwell times have jumped during the pandemic. At the Port of Los Angeles, they’ve more than doubled.

One reason is that wholesalers and retailers have too much inventory and they’ve been running out of warehouse space.

“So they started to leave inventory and containers on the ports as sort of like ad hoc free warehousing space,” Rogers said.

The ports didn’t want that. Gene Seroka at the Port of LA said they tried diplomacy and conversation.

“Nothing moved the needle,” Seroka said.

And then they said they were going to charge a fine, starting at $100 a day per container.

“And once we announced that fine on October 25, we saw those aging containers drop by 75 percent,” Seroka said.

The fine hasn’t actually gone into effect yet — apparently the threat was enough of a financial incentive for the cargo owners to get their stuff and go.

That’s only possible, of course, if there’s somewhere to go and some way to get there. That is, if there are enough trucks and rail cars.

Dwell times are rising again on the railroad that connects to the port, Seroka said. In part because of all the folders, marble notebooks and calculators — kids still use calculators? — arriving ahead of back-to-school season.