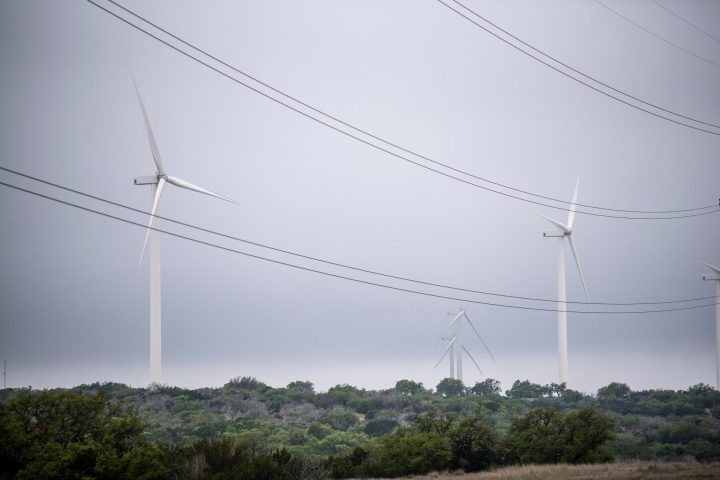 COPY
Blades from a wind turbine rotate in a field, April 16, 2021 near Eldorado, Texas. SERGIO FLORES/AFP via Getty Images

Blades from a wind turbine rotate in a field, April 16, 2021 near Eldorado, Texas. SERGIO FLORES/AFP via Getty Images
Listen Now

In Texas right now, wind and solar are producing more electricity than many expected. That’s great and is helping the state avoid blackouts for now. But getting that electricity into homes requires up-to-date infrastructure. And that’s a whole other issue.

Power plants generate electricity. Transmission lines move it from plants to substations and then distribution lines get electricity into individual homes. Michael Webber at the University of Texas said the problem right now is with the transmission lines.

“You can think of it like a highway that can only take so many cars. And at some point you can’t put more cars on the highway,” he said. “They take frontage roads or they just don’t drive. That’s what happens with the electrons too.”

Those electrons are being generated by power plants, but then they’re getting curtailed because the transmission lines can only take so many of them at a time.

Melissa Lott at Columbia University said the solution in Texas is to build more transmission lines from new, renewable energy power plants to where that power’s getting used. But building that infrastructure takes time and money.

Because she said ultimately, more electricity getting to where it’s being used means cheaper utility bills for customers.

And it’s not just a problem in Texas. Neil Millar, vice president of infrastructure and operations planning at the California Independent System Operator, said it’s in a hurry to build transmission lines as fast as possible, too.

“Practically it takes anywhere from eight to 10 years to get a major transmission line built,” he said. “So that’s why we need to get ahead of this now.”