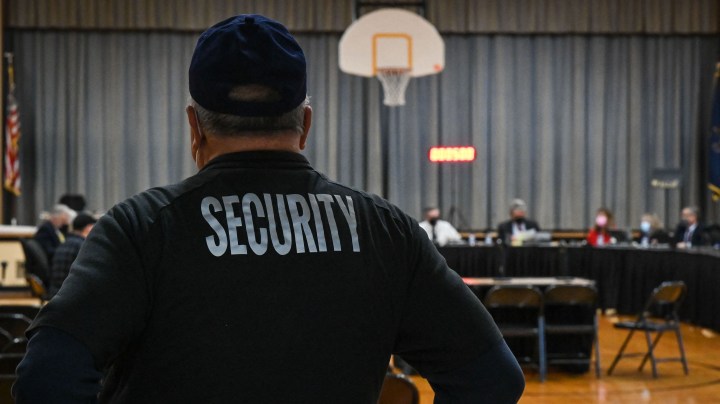 COPY
Above, a school security guard observes a school board meeting in Pennsylvania. While heightened school security measures are palatable for some parents, they're a worry for others. Kylie Cooper/AFP via Getty Images

Above, a school security guard observes a school board meeting in Pennsylvania. While heightened school security measures are palatable for some parents, they're a worry for others. Kylie Cooper/AFP via Getty Images
Listen Now

In the wake of the shooting in Uvalde, Texas, there’s a renewed focus on school security. This week, Ohio passed a law making it easier for educators to carry firearms. Overall, school security is an estimated $3 billion industry, including things like training, armed officers and video cameras. But there’s little evidence on what’s actually effective.

High school teacher Pamela Mathai remembers when she was taught how to turn a regular classroom item into a potential weapon.

“They were like, ‘Think about what objects you have in your classroom that could be used as a projectile or to hurl at somebody if they were to breach your door,'” she said.

Mathai teaches geography in Austin, Texas, and she said it’s frustrating that this sort of training takes away from her time teaching. “I feel like indignant, like angry that that’s something that even has to occupy our mind space.”

Mathai went through that training in 2019 following shootings like the one in Uvalde. Administrators put more resources into school security, generally.

“There’s always a money response,” said Odis Johnson Jr., executive director at the Johns Hopkins Center for Safe and Healthy Schools. “So over the years, we’ve just been adding layers and layers and layers of security.”

Over half of all schools have law enforcement on campus, who are sometimes armed. More than 80% of schools use security cameras and some are adopting facial recognition software. But Johnson said it’s not clear how effective these measures are in preventing violence.

“There’s a hyper-vigilance that would have to be there in order for all of these security measures to work optimally. And even then, a gun can shoot a lock open, it could shatter the glass — we’d have to get bulletproof glass,” he said. “It would be a huge amount of resource to fortify 130,000 schools in that way.”

Still, some parents say write the check. Dylan Whitehead is a father of three who lives in a suburb of Dallas.

“I’d rather do something than nothing because gun control isn’t palatable to so much of the population,” he said.

Whitehead, who’s a gun owner himself, believes there should be more restrictions on buying a gun. In lieu of that, he said he supports increased security at schools.

But increased security worries other parents. Stephanie Jayaraman lives in Katy, Texas, which is a suburb of Houston. She’s Black and has two sons who are 7 and 4.

“As a mother of Black children, especially boys, this whole, like, ‘Let’s arm everybody in schools with guns’ scares the shit out of me,'” she said.

Jayaraman said she’s worried with more weapons permitted or even required that her kids could be at risk on a daily basis.