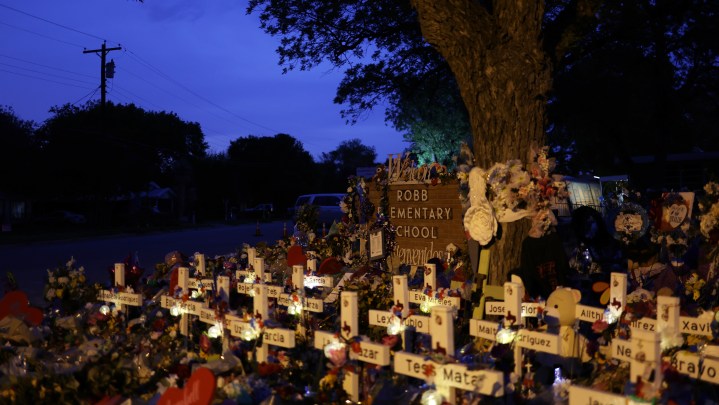 After the shooting at Robb Elementary School in Uvalde, Texas, the national conversation has been focused on the prevention of mass shootings at schools. Texas lawmakers have discussed practices and techniques that would strengthen the security of schools, from arming teachers to using bulletproof shields. In 2019, after a shooting at a high school in Santa Fe, outside Houston, the state allocated $100 million toward security upgrades to schools.

By one estimate, U.S. schools spend almost $3 billion on school security, measures like automatically locking doors and facial recognition software. Video surveillance has become common in schools across the country; by 2018, more than 80% of schools reportedly used cameras.

Marketplace host Kai Ryssdal spoke to Mark Keierleber, an investigative reporter for The 74, about the evolution of the school security industry and how “school-hardening” tactics impact students, teachers and the larger community. The following is an edited transcript of their conversation.

Kai Ryssdal: You point out in this piece that school security has been a thing, obviously, for decades, but this idea of “school hardening” really took off after Columbine. Could you explain what changed in the school security field?

Mark Keierleber: Yeah, absolutely. So after Columbine, a lot of emphasis really went into different types of technology going into schools, different types of security measures, like police officers in schools. And, in the wake of Columbine, very few school districts, for example, had security cameras that were monitoring the hallways or the outsides of the schools. Well, today, that’s pretty much universal, right? We’re seeing school districts all across the country with cameras. And that’s just one small slice of what has become nearly a $3 billion industry that includes access control, fencing, everything from bulletproof backpacks up to security cameras with facial recognition technology.

Ryssdal: Part of the product offering, if you will, goes beyond just hardening of the school sites, right? They help conduct active shooter drills, they conduct training in schools and, certainly since Uvalde, but for a while it’s been known that these drills can be excessive, they can be traumatizing for the children, they can be exhausting for the teachers and the staff. And yet, the schools kind of continue, as you say in this piece, to have to buy them.

Keierleber: Yeah, I mean, there’s this reality that school districts and lawmakers face in the aftermath of shootings, which is they have to do something, right? So there’s this big tragedy that’s scaring everybody, frankly, despite the statistical rarity of such events, and school leaders and lawmakers are put in a position to implement something that they hope will cause additional safety, will give parents a peace of mind. And the rush to harden schools is it’s certainly one of the primary strategies that we’ve seen in the past, and that we’re certainly going to see here in the next couple of months.

Ryssdal: Can we talk cost for a second? And I ask because my local school district — and look, we’re in a well-off suburb of Los Angeles — we just had to pass a special bond to get part of, you know, part of the money is going for school security, fencing and all those kinds of things. And I’m here to tell you that not every school district in the country can do that. But also, not every state capitol is going to say, here’s, you know, I think the quote in your piece was like $500,000 for every high school to do this? Where is this money coming from?

Keierleber: Yeah, well, like you mentioned, it does come from the local level, there are bond referendums in municipalities. There have been laws at the state level that actually require schools to have certain measures in place. And then there is significant federal money. In the wake of the Parkland shooting, the security companies successfully lobbied the federal government to pass the Stop School Violence Act, which appropriated millions of dollars for school districts across the country to implement different forms of a school security. And actually it appears like we’re going to be in a similar situation in the wake of the shooting in Texas.

Ryssdal: Well, so, along those lines, let me just close with this. There is no small portion of the audience of this radio program — whether they hear it on the air or on demand, it’s millions of people — they will say to me on Twitter, or in the inbox or whatever: “Do you understand how insane it is to be talking about spending billions of dollars to harden these targets, right, schools, and not be able to do anything about the fundamental problem?” And I guess I ask you, as a guy who has written and thought about this, what do you say to that?

Keierleber: Well, I do think that that’s part of the issue here, right? So the heart of the problem is guns, right, and access to guns. And the reality of the situation is that this is a very central debate in America. And gun control has long been something that has been debated but hasn’t come to fruition. So schools are saying, “You know, that might not happen. But let’s figure out what we can do.” Right? And looking at maybe something that might be proactive, but instead of looking at a proactive solution, we’re looking at, you know, a reactive solution.