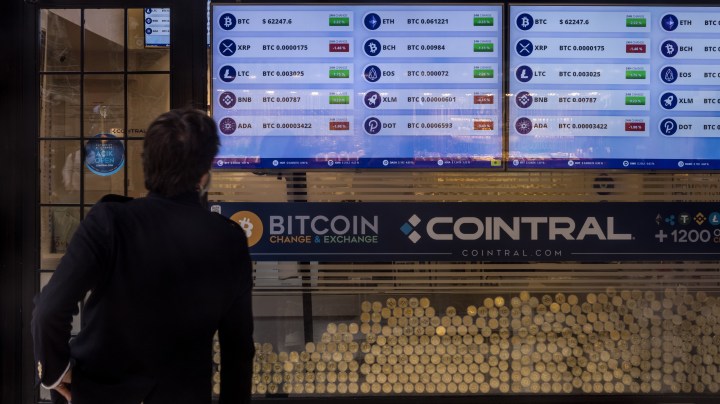 COPY
A cryptocurrency exchange office in Istanbul in October. Last month, the "stablecoin" terraUSD lost $60 billion in value in a matter of days. Chris McGrath/Getty Images

Steve Insall has watched his life savings disappear by the second in an app on his phone.

He spent most of Tuesday, May 10, in his condo, trying to withdraw anything that remained of the $320,000 balance that was there just days before.

The app wouldn’t let him. While watching Bloomberg TV talk about a cryptocurrency he only learned of the day before, he tried to hide his panic from his wife.

“She was getting ready for work, the baby was eating on the highchair,” Insall said. “The 3-year-old was on an iPad. I was keeping it all inside.”

Insall was losing his savings because of the crash of terraUSD, an algorithmic “stablecoin” that shed $60 billion in value in a matter of days. Stablecoins are a fixture of the cryptocurrency economy and are supposed to never depeg from the dollar.

If you’re wondering why anyone would tie all their money to an algorithmic stablecoin, Insall wonders that too. He didn’t know that’s where his money was.

“I didn’t even know what ‘depegging’ was, honestly,” he said.

Insall is one of nearly 5,000 retail investors who made $47 million in deposits into Stablegains, a now defunct company that offered a crypto facsimile of a savings account with interest rates up to 15%.

Many Stablegains users — including bartenders, postal workers and general contractors — feel they were misled by Stablegains’ marketing, which stressed the safety, ease and promise of decentralized finance, or “DeFi” for short.

The Stablegains experience has left many rethinking the limits of a common mantra among crypto investors: “Do your research.” What if you thought you did the research and still lost everything?

A new market for DeFi “gatekeepers”

In blog posts and on its website, the company compared its offerings to traditional savings accounts. Except where a brick-and-mortar bank like Citi was giving depositors less than 1% interest, Stablegains could offer up to 15%.

How can a savings account generate 15% interest? Through the miracle of DeFi.

“What is being promoted by individuals involved within DeFi is that not only is this like legacy finance, but it’s actually better,” said Ryan Clements, a law professor at the University of Calgary who predicted the collapse of terraUSD. “Because we’re disintermediating banks, we’re disintermediating investment managers, and oh, by the way, it provides significantly higher returns.”

Think of how a bank works: You deposit cash, the banks loans it out to mortgage holders and businesses, the bank collects interest on those loans and you get a cut of that interest.

The same principles are associated with DeFi, but cash deposits are converted into crypto, and that crypto is lent to borrowers who typically invest in more crypto.

Actually depositing into or borrowing directly from a DeFi platform often requires a decent degree of technical sophistication — which is where a company like Stablegains comes in.

“So there’s this new market of what I called gatekeepers or intermediaries that are emerging,” Clements said. “[They’re] saying, ‘Hey, we will do it for you. You deposit your funds with us, we will custody those funds, we will then take the necessary technical steps to interface into this world.'”

Stablegains’ pitch was aimed at retail investors with varying degrees of tech-savviness.

“I don’t Snapchat, I don’t TikTok, I don’t whatever those other things are,” said Jayson Noetzel, a general contractor in Kansas who also poured his life savings into Stablegains.

Noetzel may not TikTok, but he stumbled across Stablegains through an older form of social media.

“I am pretty sure that I saw them on Facebook,” Noetzel said. “Like I was Googling Roth IRAs, mutual funds, so of course Google and Facebook have to be in cahoots with each other because all of a sudden you start seeing investment things advertised on Facebook.”

Noetzel, Insall and others felt comfortable depositing their savings with Stablegains partly because of the company’s pedigree. The startup was backed by Y Combinator, the prestigious venture capital accelerator that had launched tech titans like Airbnb and Dropbox.

“I felt, ‘Wow, they have a lot of confidence by richer, smarter people than me,'” Insall said. “It sounds like a no-brainer.”

But the real sell for many Stablegains users was the convenience of its accounts. It offered direct deposits from checking accounts and wire transfers and no long-term lock-up periods. And while not FDIC-insured, it still had a plan for mitigating risks.

“It said they were diversified over several different types of stablecoins, so that if one was low, they would work each other out,” Noetzel said. “And they said that all the investments were backed up with collateral.”

Noetzel, Insall and others were particularly reassured that one of the stablecoins prominently listed on Stablegains’ website was USDC. While algorithmic stablecoins like terraUSD were tied to the dollar via a complex web of math and code, USDC was backed by actual dollars and Treasury bills.

But if Stablegains users had read the company’s Terms of Use, they’d find that Stablegains was generating its high interest rates by depositing funds into Anchor protocol, another crypto savings service. Anchor only takes deposits and pays interest in terraUSD. When Terra crashed, so did Anchor, and down went Stablegains.

Stablegains declined an interview request but referred to a public statement.

“Of course, as all users know, the DeFi space does present risks, which are publicly known and additionally disclosed in our Terms of Use, online in our learning center, website footer and blog — but this event was particularly unfortunate as we were confident in our business vision and its ability to benefit users. At this time, our focus remains on helping users who have funds remaining in their accounts.”

Stablegains’ plans to diversify beyond Anchor were referenced here and there on the Stablegains website. Via email, company co-founder Kamil Ryszkowski also linked to a post the company had made in its Discord channel, which solicited input from users on what other crypto lending platforms Stablegains should explore in the future.

Still, even sophisticated crypto investors who had money in Stablegains were surprised to learn their deposits were tied up in terraUSD.

“But they weren’t. They weren’t getting the same regulatory safeguards. I think there needs to be clear disclosure but also accessible disclosure.”

After being contacted by several Stablegains users, Kevin Osborne at the class-action law firm EKO Law explored the possibility of a lawsuit.

But for now, any plans for litigation are on hold. “If a defendant has very little in the way of liquid assets, has no insurance, then you’re not going to be doing anything for the people that you represent,” Osborne said.

And to go after Stablegains’ venture capital backers, plaintiffs have to meet a high legal threshold, he added. But there is a somewhat ironic source of hope for Stablegains users in all of this.

Many banks are allowing them to reverse at least some of their direct deposits into Stablegains.

Noetzel, the Kansas contractor, said it looks like he may recoup most of what he lost that way. Like many other Stablegains users, he said he’s not ruling out investing some of it in crypto again.