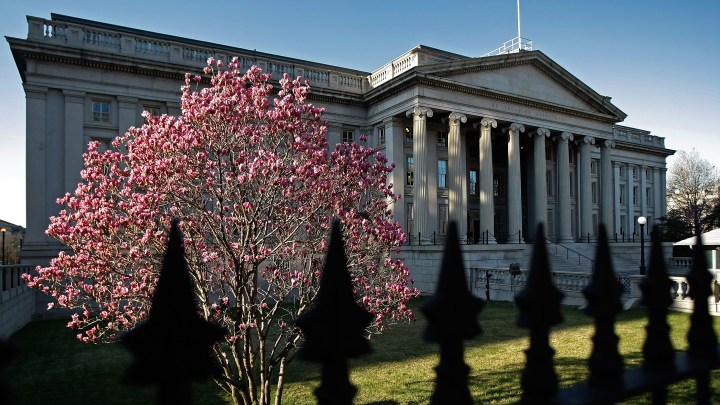 COPY
Stablecoins are involved in roughly 80% of cryptocurrency trading and lending transactions and aren't supposed to fluctuate in value. But the Treasury Department is concerned about the potential for a stablecoin run. Chip Somodevilla/Getty Images

Stablecoins are involved in roughly 80% of cryptocurrency trading and lending transactions and aren't supposed to fluctuate in value. But the Treasury Department is concerned about the potential for a stablecoin run. Chip Somodevilla/Getty Images
Listen Now

The U.S. comptroller of the currency — basically the person who regulates U.S. banks — recently compared the $2 trillion cryptocurrency market to an inverted pyramid.

The implication was toward the top of the pyramid were the things you’ve likely heard about: bitcoin and ethereum and those exchanges that ran all those Super Bowl ads.

And at the base of the pyramid, supporting everything, were stablecoins, cryptocurrencies that are typically pegged to a fiat currency and aren’t supposed to fluctuate in value — one stablecoin equals one dollar.

If, in the near future, the base of that pyramid crumbles and the crypto market collapses, it’s possible that people who have never heard of dogecoin or are still trying to figure out Web 2.0 may be impacted, said Lee Reiners, who teaches financial technology policy at Duke University School of Law.

“All of us should care, even if we’re not invested in crypto at all,” he said. “Just like many of us were not buying mortgage assets leading up to 2008.”

As the name implies, stablecoins aren’t supposed to be volatile. About 80% of transactions on major cryptocurrency trading and lending platforms involve them.

Crypto investors use stablecoins to temporarily park money for buying and selling unstable cryptocurrencies. Especially overseas, it’s much easier than going back and forth to a traditional checking account. But there are other uses that Reiners said amplify the risk of a meltdown.

“Stablecoins are increasingly being used in what’s known as the defi, or the decentralized finance ecosystem, where you can post stablecoins as collateral to take out a cryptocurrency loan,” Reiners said.

Or you can just buy something with stablecoins straight up. People are just beginning to use stablecoins for direct purchases, but that’s where the industry is headed, according to Dante Disparte with the stablecoin USDC.

USDC can tell merchants, borrowers and investors its $50 billion in digital coins is just as reliable as good ol’ American greenbacks; it won’t go up and down in value based on an Elon Musk tweet.

And it can say that because USDC is backed by cash or other safe, liquid assets — for every dollar of USDC in circulation, Circle, its issuer, said there’s an equivalent dollar in a bank account it can fork over to someone who wants to redeem digital cash for the real thing.

“Major traditional players and banks and others are starting to look at USDC as that sort of proxy for the dollar on the internet,” Disparte said. “Today, there’s more than $50 billion of USDC in circulation, all of that is backed by the most conservative liquid dollar reference assets available cash and short-dated U.S. Treasuries.”

But there’s no federal rule that requires stablecoins to keep reserves in safe assets or prove that stablecoin issuers even have what they say they have.

“There are questions about whether [stablecoin issuers] can in fact provide the exchange for a dollar when investors want them,” said Nellie Liang, undersecretary for domestic finance at the U.S. Treasury Department.

Stablecoins do have great technological promise for speeding digital payments and other financial innovations, Liang said. But she’s concerned about the consequences of a stablecoin run — when, like a bank run, a rush of stablecoin holders lose confidence in a coin and demand real currency back from a stablecoin issuer.

“Companies that rely on that commercial paper for funding could lose access to those funds very quickly,” she said.

Tether, the largest stablecoin, with $80 billion in circulation, is one of the biggest owners of commercial paper in the world, according to recent disclosures. But there have always been doubts about what exactly Tether holds in its reserves.

“Essentially from the very beginning, there have been questions and concerns around Tether’s reserve,” said Duke Law’s Reiners.

Red flags are all over the place. Tether won’t disclose in detail what commercial debt it owns; it hasn’t denied rumors that it’s tied to troubled Chinese real estate developers.

Tether had legal trouble with the New York attorney general, and directly redeeming Tether for dollars can be a murky process.

“Tether is stable because crypto traders need it to be, therefore they act as if it is,” Reiners said. A few hedge funds have shorted Tether, essentially betting that collective psychology will break.

Tether did not respond to a request for comment. Its backers have repeatedly pointed out that despite all the rumblings, Tether’s value hasn’t moved — it’s still pegged to a dollar. The company also releases attestations on its reserves that are verified by an accounting firm based in the Cayman Islands.