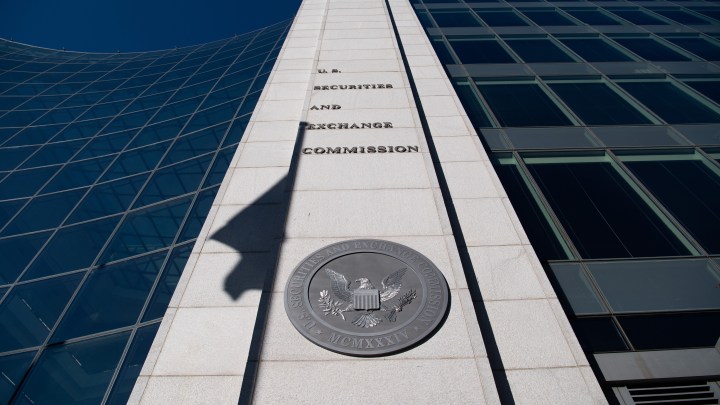 COPY
The Securities and Exchange Commission has more people to oversee cryptocurrency than the smaller Commodity Futures Trading Commission, but other factors are involved. Saul Loeb/AFP via Getty Images

The Securities and Exchange Commission has more people to oversee cryptocurrency than the smaller Commodity Futures Trading Commission, but other factors are involved. Saul Loeb/AFP via Getty Images
Listen Now

The explosive growth of cryptocurrencies has touched off a debate in Washington, D.C., over how to regulate them. Or, more precisely, who should regulate them.

Securities and Exchange Commission Chair Gary Gensler has argued that it should be his agency because, as others have argued as well, cryptocurrencies are an awful lot like stocks.

But U.S. Sen. Cynthia Lummis, a Wyoming Republican, and U.S. Sen. Kirsten Gillibrand, a New York Democrat, believe the responsibility should fall to the much smaller Commodity Futures Trading Commission. They’ve introduced a bill that would put the CFTC in charge of regulating crypto. That also happens to be the industry’s preference, its recent troubles notwithstanding.

But which agency is better positioned for the task?

The Securities and Exchange Commission oversees securities, of course — “generally things like stocks and bonds,” said Georgetown Law’s Adam Levitin. “Those are things where there is some kind of an expectation of future profits from an investment of money in a common enterprise.”

On the other hand, the CFTC’s main job is to regulate markets in commodity futures, Levitin said, “making sure that the transactions are being done fairly without fraud or manipulation.”

The pioneers of cryptocurrency were inspired by libertarian principles. But crypto is now an industry, and “at least part of it wants regulation,” Levitin said. “They want regulation because it has a legitimizing factor, but they don’t want heavy-handed regulation. They want the benefits of regulation without the costs.”

The SEC has more than 4,000 employees; the CFTC only has a few hundred. A former chairman, Timothy Massad, said that if the agency is going to be responsible for crypto, it will need more resources.

“That would be a very, very big concern, if it’s not adequately funded. And frankly, history doesn’t leave one optimistic.”

In the aftermath of the 2008 financial crash, the CFTC was tasked with overseeing the market for derivatives of mortgage-backed securities — among others — while its budget hardly changed.

“That was a real problem for us,” Massad said. “It really slowed us down and made it hard to do all the things we needed to do.”

Meanwhile, some consumer advocates say Congress might do better by sitting this one out for now.

“These agencies already have the authority they need to regulate this industry,” said Mark Hays, a senior policy analyst at Americans for Financial Reform. “Most of the cryptocurrency activity out there walks, talks and acts like a security.”

And that’s why he believes the SEC should take the lead.

Clarification (June 9, 2022): This story has been amended to clarify the scope of the CFTC’s regulatory responsibilities in the aftermath of the 2008 financial crisis.