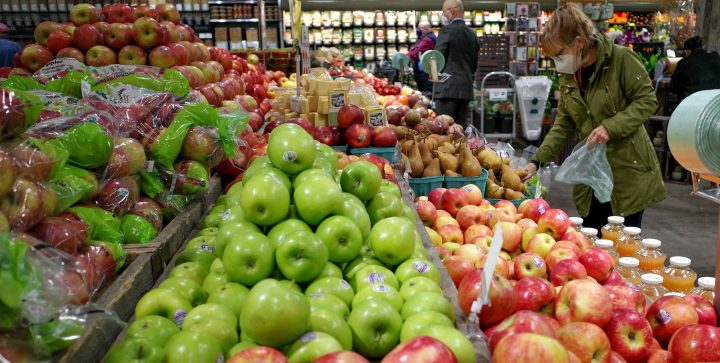 About $240 billion worth of food is wasted annually in the United States, according to research. Mandel Ngan/AFP via Getty Images
I've Always Wondered ...

About $240 billion worth of food is wasted annually in the United States, according to research. Mandel Ngan/AFP via Getty Images

I’m listening to a report about food waste. They discuss both retail and household food waste. When various broadcasts give the percentage of waste from households, I have to ask — how is this metric researched? Does someone/some entity actually look through garbage to see how much food is wasted?

To figure out how much food we waste, researchers trawl through something a lot more sanitary, but in some ways just as messy: data.

Economists Edward Jaenicke and Yang Yu set out to answer the question and published research in 2020 that found the average American household wastes nearly 32% of the food it purchases.

That amounts to about $240 billion in wasted food annually.

Jaenicke and Yu, then both at Penn State, looked at the difference between the amount of food households purchased (or acquired) in a week and household members’ basal metabolic rates — the amount of calories or energy needed to maintain one’s body weight.

To illustrate what this means, let’s simplify their research. Assume that someone has a basal metabolic rate of 2,000 calories a day, or the amount needed to maintain their body at rest. If they purchase an average of 2,936 calories worth of food, that’s 936 calories worth of uneaten food per day, or about one-third (32%) of the amount they bought.

The two used an economic method called the stochastic production frontier model, which allows researchers to calculate inefficiencies. In this context, that’s the amount of “food that was not fully utilized in this process,” Jaenicke said in an interview with Marketplace.

To determine how much food households buy in the first place, Jaenicke and Yu used data from the Department of Agriculture’s National Household Food Acquisition and Purchase Survey, or  FoodAPS, which represents 4,826 households. This data includes information on “foods purchased or otherwise acquired for consumption at home and away from home,” including food received through assistance programs such as SNAP.

Jaenicke said they chose this data set because it recorded food purchased or acquired from a variety of places, including supermarkets, restaurants and cafeterias.

However, Jaenicke noted that this wasn’t the perfect data set and there are some caveats. For example, some households could have drawn from already-existing food stock during the week, or purchased more food to store for the future. That means the time period of the food purchases doesn’t necessarily align with the period of consumption.

Then, they needed to find a data set to represent how much food was being eaten. That was a tricky task.

“In addition to food waste not being directly measured in any of these data sets, eaten or consumed food is also hardly ever measured,” Jaenicke said.

That’s why they chose to calculate the BMRs for the people they studied, he explained.

The two aren’t the only researchers who have calculated how much food we waste. The USDA’s Economic Research Service has also released estimates using survey data, finding that in 2010, 31% of food at the retail and consumer level went uneaten — similar to Yu and Jaenicke’s findings. They instead calculated this amount using the ERS’ Loss-Adjusted Food Availability Data Series.

Jaenicke said when the ERS calculates food waste, it uses two databases that look at the differences between food purchases, or acquisitions, and consumption. For example, they can see the average number of apples households are buying and can subtract the apples the average household is eating to derive the amount of waste associated with apples.

“That’s great, but it doesn’t allow for any differences across households,” Jaenicke said.

Jaenicke and Yu found that even the most efficient households wasted about 9% of their food, while the least efficient wasted almost 90%. Most households were in the middle, wasting between 20% and 50%.

Jaenicke pointed out that food waste seems “irrational” — after all, why would people throw away the food they bought? But these findings show that food waste isn’t arbitrary, and there are very real reasons that food goes uneaten, depending on income level or household size.

Jaenicke said he’s still thinking about how the issue should be addressed. Maybe supermarkets could offer smaller portion sizes. And because of the environmental consequences associated with food waste ending up in landfills, Jaenicke said, policies could be formulated to encourage people to compost.

It turns out that our garbage can reveal a lot about us.