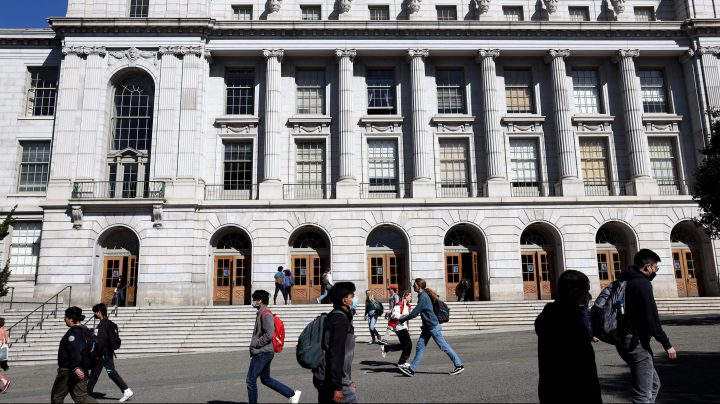 COPY
Higher education enrollment continues to drop, even after classes have returned to in-person.

Higher education enrollment continues to drop, even after classes have returned to in-person.
Listen Now

The tight labor market and attractive wages for young workers might have something to do with the fact that college enrollment continues to decline. New data show undergraduate numbers shrank again this spring, down almost 5% from the same time last year. Since the pandemic began, enrollments have dropped by 1.4 million, which could have big implications for the workforce and higher education.

Some enrollment declines were to be expected during the height of pandemic disruptions, but by now it should have recovered.

“You know we really thought things would be starting to pick up a little bit at this point, particularly because most colleges are now back to in person classes,” said Doug Shapiro, research director of the National Student Clearinghouse’s research center. He said enrollments are dropping at a faster rate now, even at some four-year colleges.

“So that says that more students from the middle class are really rethinking, in my view, the need for a bachelor’s degree,” Shapiro said.

There are multiple factors pushing and pulling young people away from college, according to Lauren Bauer, a fellow at the Brookings Institution.

On the push side: some continued pandemic weirdness, the higher costs. On the pull side: “The labor market has been most hospitable to the youngest workers, you know, the wage returns to being in the labor market right now, for young people are off the charts,” Bauer said.

But there is no guarantee workers will continue to have the upper hand and the opportunities for well-paid jobs for workers with college degrees are only likely to increase in the future, according to Anthony Carnevale, research professor at Georgetown Center on Education and the Workforce.

“So it doesn’t change the facts,” Carnevale said.

The current shift could, however, change the way higher education operates. As young people get more picky about return on investment, he sees higher education moving toward more of a training model aimed at preparing students for jobs.