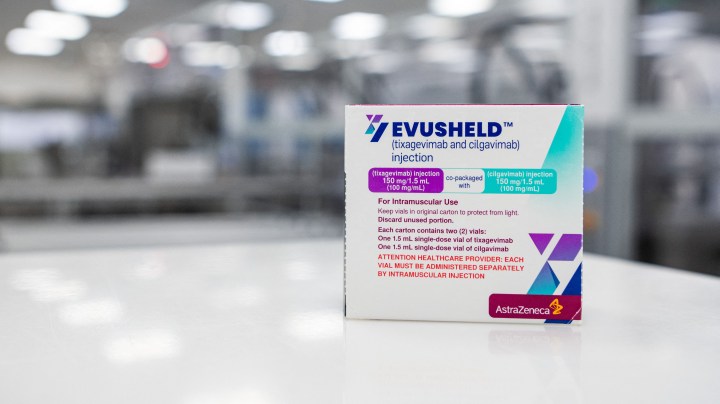 COPY
The Biden administration ordered 1.7 million doses of Evusheld, but around three-quarters of those may have gone unused, according to some estimates. Jonathan Nackstrand/AFP via Getty Images
COVID-19

The Biden administration ordered 1.7 million doses of Evusheld, but around three-quarters of those may have gone unused, according to some estimates. Jonathan Nackstrand/AFP via Getty Images
Listen Now

It’s been about six months since the pharmaceutical maker AstraZeneca released a COVID-19 antibody treatment called Evusheld. It’s designed to stop COVID-19 from infecting people with weak immune systems. For many of them, the COVID vaccine doesn’t work. The government has approved Evusheld for emergency use and is in charge of buying and distributing it, as it was for COVID vaccines when they first rolled out.

But there’s been a disconnect between the amount of Evusheld the government bought and how much is getting to patients, said Marcia Boyce, who suffers from a blood cancer called chronic lymphocytic leukemia. The drugs she takes for her condition suppress her immune system. So after getting the COVID vaccine, she got tested to see if she had antibodies.

“For me, personally, I had zero. So after the two vaccines and a booster, I had still zero protection from COVID. I was upset,” Boyce said.

Evusheld works by delivering those antibodies directly. Boyce heard about it on a CLL Facebook group, then started one on Evusheld. “Everybody was talking about it and couldn’t wait to get it,” she said.

But it wasn’t available at her hospital in Illinois. She started looking for it in Florida, where she spends her winters.

“In the beginning, there were only four places in Florida that had it. I called all of them, and they only were doing it for their patients,” Boyce said.

She finally found a small, private clinic near Fort Lauderdale that could provide her with doses of Evusheld. As it turns out, that clinic had received more Evusheld doses than any other provider in Florida, including some of the state’s largest hospitals.

Dr. Dorry Segev, a transplant surgeon at New York University, said that’s not an isolated case. “The rollout of Evusheld has been complicated, confusing and frustrating for many people.”

He said that from the beginning, the math didn’t add up. The Biden administration ordered 1.7 million doses for the more than 7 million Americans who are immunocompromised. Yet by some estimates, around three-quarters of those Evusheld doses may have gone unused.

Segev blames a lack of outreach.

“There were no centralized efforts to educate patients, their providers, and, as a result, many providers who take care of immunocompromised people were not aware that this even existed,” he said.

In a statement, the U.S. Department of Health and Human Services confirmed it has “more Evusheld available than is being requested by states and territories,” which send it to local hospitals and clinics. And a spokesperson acknowledged that getting the treatment to people has been challenging.

This unequal distribution has led some health care systems to ration the treatment.

Dr. Daniel Kaul, a professor of infectious disease at the University of Michigan, said at first, his hospital ranked patients based on who needed it the most and set up lotteries.

“That obviously creates a whole new workflow about identifying those patients and offering it to them in a random fashion,” Kaul said.

He added that that randomness has helped ensure fairness, “so that you’re not maybe prioritizing people who are most educated and are therefore calling up and requesting it.”

The labor in this new workflow has fallen to people like Dr. Aimee Payne, director of the Clinical Autoimmunity Center of Excellence at the University of Pennsylvania. She specializes in a rare autoimmune disease called pemphigus vulgaris, which can cause fatal blistering. Its treatment can wipe out a large part of the immune system, so the COVID vaccine doesn’t appear to give her patients full protection.

“Some of them agreed immediately. Some of them had additional questions,” Payne said. “Some of them wanted to talk to their families about it. And then I would call them back a second time to go over it.”

Things got more complicated in February, when the Food and Drug Administration decided that each recipient should get two doses of Evusheld. Overnight, the number of people originally slated to get help was cut by half.

Health professionals are trying to help, including Nicholas Torney, a clinical pharmacist in Traverse City, Michigan. His team has created a tool kit “for providers to understand the who, what, where, when and why about this medication. And also for nurses and pharmacists related to how to actually order the medication.”

AstraZeneca told Marketplace it has more Evusheld on hand if the government wants to buy it. The Biden administration says it needs funding from Congress to do that.