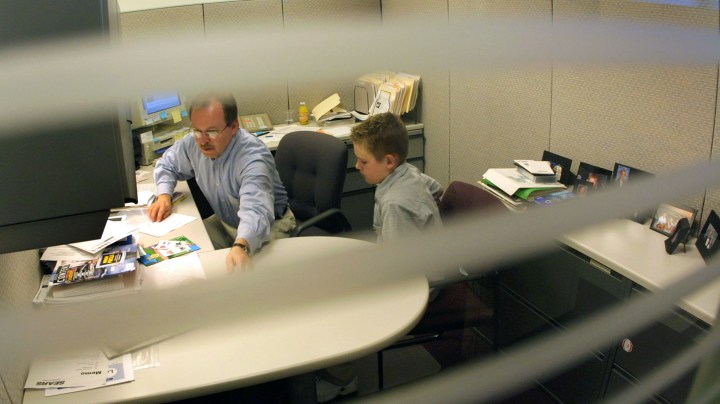 COPY
Some parents began taking their children to work nearly 30 years ago to give them a firsthand look at their professions. Tim Boyle/Newsmakers via Getty Images

Some parents began taking their children to work nearly 30 years ago to give them a firsthand look at their professions. Tim Boyle/Newsmakers via Getty Images
Listen Now

It’s been about three decades since Take Our Daughters to Work Day began. The practice started as a way to help girls learn about different careers. It later expanded to become Take Our Daughters and Sons to Work Day. For the past two years, for some parents, everyday has been take your child to work day. Now, more employees are going back to actual workplaces, and yesterday, which was the official day, some brought their kids with them.

That includes 6-year-old Charlie Gala, who commuted from Ossining to New York City, to accompany his father, Jon, at his job at the software company Datadog. While in Grand Central Terminal, Charlie described how he was dressed like his dad.

Which seems just right for a tech company. Though actually being at one in person after months of pandemic living is kind of an unusual experience not just for Charlie and his 10-year-old brother Lyle, but also their dad, Jon.

“I’ve been working in a home office for all this time,” said Jon Gala. “They would sometimes peek in and poke up their faces on Zoom calls, but it’s fun to get them back in there and see the adult world and where things happen and people go.”

Charlie Gala also wants to work in a tech-related field. Well, kind of.

“Charlie wants to be a game developer,” said Lyle.

“But I do it in space,” adds Charlie.

This kind of creative thinking should be encouraged, said Surabhi Lal, one of the board co-chairs for the nonprofit Take Our Daughters And Sons To Work.

The organization works with schools and employers to increase access to these possibilities. Earlier in the pandemic, when fewer people were going into work, it started offering virtual programming. This year, students could stream a discussion between different workers, including a video game designer and a public health specialist. Surabhi Lal says this is especially useful for kids whose parents can’t take them to work.

“There’s a lot of people who work in environments where it may or may not be appropriate for kids to be there. This gives kids a way to really interact with professionals, and also think about what it is that they might want to do,” said Lal.

The day has its critics, including Richard Reeves, who runs the Future of the Middle Class Initiative at the Brookings Institution.

“It just immediately struck me as a practice that is almost designed to pass on status from one generation to the next,” said Reeves.

Reeves said employers should make a point to reach out to kids who don’t have family ties.