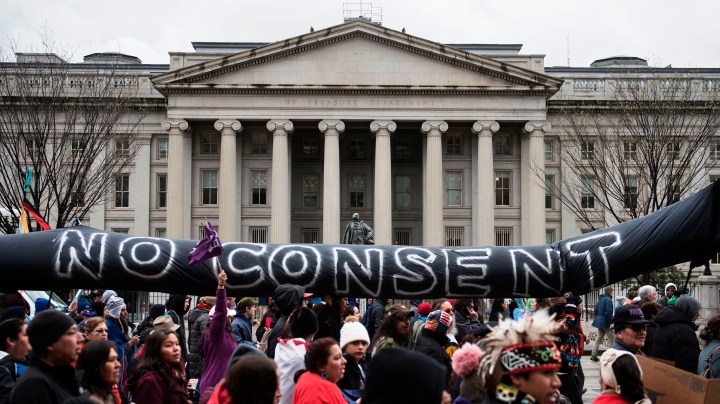 COPY
Activists protest against the the Dakota Access Pipeline in Washington, D.C. in 2017. The pipeline, said University of Colorado professor Kristen Carpenter, is a prime example of the importance of affirmative consent by Indigenous people. Brendan Smialowski/AFP via Getty Images

Activists protest against the the Dakota Access Pipeline in Washington, D.C. in 2017. The pipeline, said University of Colorado professor Kristen Carpenter, is a prime example of the importance of affirmative consent by Indigenous people. Brendan Smialowski/AFP via Getty Images
Listen Now

Today, the United Nations Permanent Forum on Indigenous Issues convenes in New York City for a week of discussions. Indigenous rights related to business and the economy are on the agenda.

Many governments require corporations to consult with Indigenous people before developing their territory. Indigenous leaders say that’s not enough.

“Consultation does not entail consent,” said Pablo Rueda-Saiz, a law professor at the University of Miami. At this week’s forum, he says Indigenous people will push for stronger protections against unwanted development and resource extraction.

“Requiring that multinational corporations have the consent of Indigenous people before they enter into their territories,” said Rueda-Saiz.

“It’s an opportunity for tribes to have a seat at the table and negotiate the terms of these agreements rather than be forced to protest or litigate later,” said Kristen Carpenter, professor of Indian Law at the University of Colorado.

Carpenter said the protests against the Dakota Access Pipeline at Standing Rock make a good case for companies to seek affirmative consent.