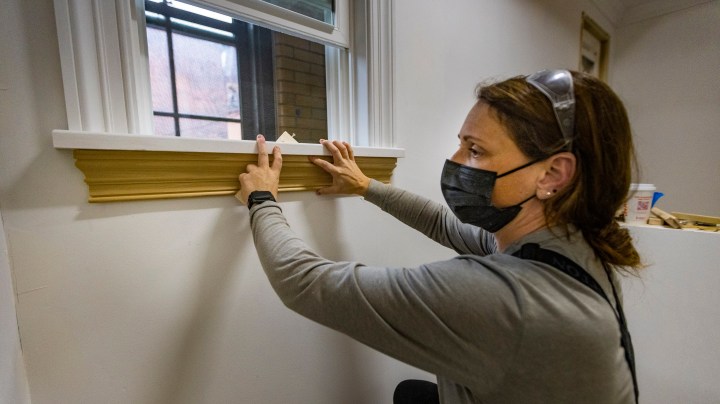 COPY
Danielle Chagnon fits a piece of molding beneath a window sill during class at the North Bennet Street School in Boston's North End. Chagnon wants to make a career change from being a math teacher to a contractor. Jesse Costa/WBUR

Danielle Chagnon fits a piece of molding beneath a window sill during class at the North Bennet Street School in Boston's North End. Chagnon wants to make a career change from being a math teacher to a contractor. Jesse Costa/WBUR
Listen Now

Danielle Chagnon taught math for the last 15 years. But at 38 years old, she decided to take a more hands-on path: carpentry.

Standing in the workshop of the North Bennet Street School in Boston, Chagnon held up two pieces of window moulding that needed to be joined accurately at 90 degrees.

“There’s so many details you never think of,” she said, pointing to a small imperfection. “That’s supposed to be unnoticeable, just blend in — it’s really difficult,” she said.

Millions of workers have left their jobs during the pandemic, and many of them are going into new fields. So instead of calling this shift the “Great Resignation,” people at Boston’s 141-year-old North Bennet Street School like to say “the Great Redirection.”

Chagnon decided to enroll in the carpentry program at the school in Boston’s North End after she took to making tables and cutting boards in her spare time. She’d been mulling the change for a few years, but COVID-19 was the tipping point.

Yet sometimes, with her bank account dwindling, Chagnon said she questions her decision. Tuition there is $25,000 a year.

“But I’m doing something that I feel like is right for me,” she said. “Yeah, I made the right choice.”

The North Bennet Street School had to limit enrollment early in the pandemic to about 100 students. But now it’s adding more space, and inquiries are up 25% over the past two years — even though some of what the school offers is very niche, with programs in things like bookbinding and violin making.

“I do think people are taking a moment to assess what their values are, what the lifestyle is that they want,” said Sarah Turner, North Bennet Street School’s president. “I think that’s also a generational shift.”

It’s a shift that’s coming at the right time, said Tony Carnevale, director of Georgetown’s Center on Education and the Workforce.

Remember that new $1.2 trillion federal infrastructure plan? Carnevale said it will mean more demand for tradespeople in the years to come.

“It is going to be within the next six or seven months when infrastructure really hits the street, when the politicians finally cut the ribbons for the new bridge or the new whatever, somebody’s going to hire somebody,” he said.

The Associated General Contractors of America estimates the industry will add hundreds of thousands of new jobs each year to meet that demand. And in the first months of this year, the group reported hourly wages rose at the steepest pace in nearly four decades.