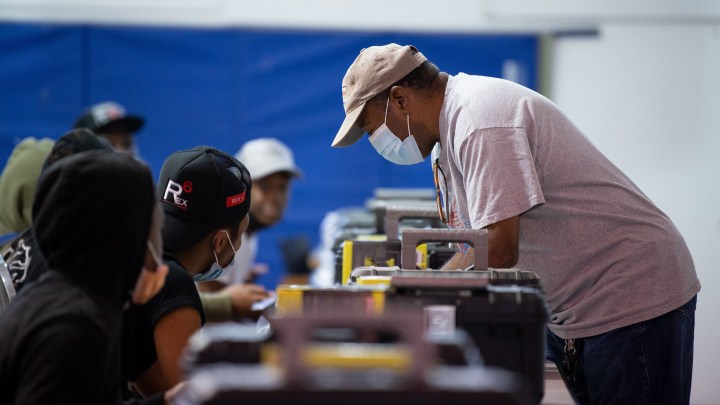 For many high school students, the pandemic has meant a lot of time spent online during and after school, and a lot of time that’s unfilled. One program in Philadelphia that started in August aims to fill that time with something constructive, offering a path to employment and giving young people in-person, hands-on experience.

Over the course of 20 weeks, Anton Moore’s program will teach 10 young men how to assemble doors and floors, put up Sheetrock and paint walls, among other skills.

They’ll also get paid. The free program provides a stipend of $150 a week for showing up to class.

Moore, executive director of Unity in the Community, said the goal is for students to either go into business for themselves or join a building-trades union for job opportunities that pay several times the city’s minimum wage of $7.25 per hour.

Moore said he personally recruited all the students because they each gave Moore a reason to be concerned about the student’s future. “A lot of these young men are at-risk young men that could be somewhere else doing something negative, but they’re here in this program learning,” he said.

Most of the first class was devoted to teaching the group how to use a yardstick. Students — who range in age from 14 to 18 — also learned to operate a cordless power drill that each gets to keep, along with several other tools, after the program wraps up this winter.

For Nazir Anderson, the program is an opportunity to learn a trade that can put money in his pocket for the rest of his life, even if it never becomes his main source of income. Being able to help his mom with the bills is another plus, he said.

The 18-year-old is also grateful to have a space where he can let his guard down a bit and not think about the rise in gun violence in his city.

At the end of the program, Moore and his team will prepare the older students for required union exams and help connect younger students to freelance jobs.

It’s unclear whether the program will continue past this year. It’s not city backed or grant funded. Moore raised the $60,000 he needed to get it off the ground by pitching the idea to local investors.