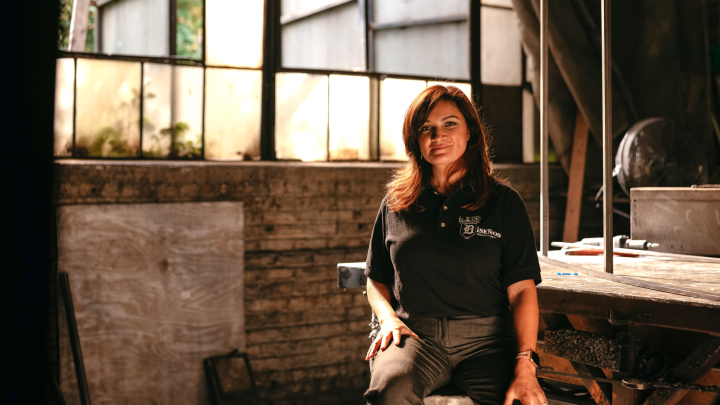 The manufacturing sector will need 2 million new workers in the next decade, according to a recent report published by The Century Foundation. Its current workforce is 67% white non-Hispanic and 70% male.

Such efforts would also promote upward mobility and help address racial income inequality, he said, since manufacturing jobs typically pay about 20% more than jobs in retail and hospitality for workers with no more than a high school diploma.

Nieves Longordo faces this labor challenge in the four-decade-old business she took over from her stepfather in 2010: Diseños Ornamental Iron in Detroit’s Mexicantown. The 20,000 square-foot metalworking shop resonates with the sounds of metal-grinding machines and crackle of welding as seven skilled machine-tool operators custom fabricate furniture, railings and gates, and fixtures for public parks.

Longordo said the company is plenty busy, and she can handle the volume of work that’s coming in with her current crew of workers, many of whom have been with the company for 20 years or more.

But “a lot of my guys are aging out, and it’s hard to find youth — or younger generations — to come in and fill their spots,” she said. “So that’s really where I’m struggling. Not so much having the talent; we have it — it’s just training youth.”

Public schools no longer teach vocational programs, Longordo said, so the mostly Black and Latinx young people who live in the neighborhood aren’t prepared for jobs with manufacturers like her who want to stay in the neighborhood.

“We told our youth, ‘Go to school, get an education, get an office job.’ And now, as a result, there’s a shortage of skilled workers,” she said.

Where there have been training and apprenticeship programs, there’s plenty of opportunities. Back in 2012, Marketplace reported on an advanced manufacturing vocational program then operating out of a public high school on Chicago’s West Side.

Rahkeem Buford graduated from the program that year.

“I completed four years there,” Buford said. “They taught us about [computer numerical control] machines, engineering, different measurement tools, programming codes, safety codes, and they helped us get credentials.”

The teachers and staff also helped graduates prepare for and get job interviews — and jobs.

Buford is now 27. He’s worked as a machinist at three Chicago-area manufacturing plants. He’s been a union shop steward, and he’s received steady pay raises as he’s learned new skills on the job.

“When I started working in 2012, I was making $11. Now I make $23 an hour,” Buford said. “There’s a lot of opportunity. And especially now with COVID, I feel like there’s even bigger demand. You have some companies that’ll be willing to give you sign-on bonuses, or if you want to go to college to further your knowledge, some companies will do tuition reimbursement.”

Buford also works with a Chicago nonprofit, Manufacturing Renaissance, to recruit other young people into manufacturing. And he gives the same spiel to younger members of his own family.

“In my family, I’m the first one to be a machinist,” Buford said. “My mother works for the post office. I have a lot of family members who work for the post office, we’re like a post office family. So this is new territory. I do like that I got into it, though, because my younger cousins — I’m able to tell them about another successful way they can possibly choose in life, versus just going to college.”

The industry coordinator for Manufacturing Renaissance, DeeDee Jones, said she can get high school grads trained and hired into local production jobs that pay well above minimum wage, with vacation and retirement benefits and oftentimes on-the-job training.

The challenge is convincing them it’s even worth considering.

“The younger folks are looking for mission-driven companies, they want to make a difference in their careers,” she said. “That’s different than just going to work to get a check to provide for the family.”

Another hurdle to diversifying the manufacturing workforce becomes evident every time Stephen Tucker at the Northland Workforce Training Center in Buffalo, New York, takes a group of high school students into a local manufacturing company.

Tucker runs a paid summer internship program in which most of the students are Black and brown, while he says most of the workers they see are “older white men,” he said.

Tucker added that the business owners and managers these young people have to network with on these site visits are older white men, too.

“We are now placing students of color in companies where they are the only ones working in that company that looks like them. And that can be very intimidating,” he said.

There are 3,000 open manufacturing jobs in the Buffalo area right now, Tucker said, and 20,000 jobs will need to be filled as older skilled workers retire in the coming years. His goal, he said, is to “upskill workers displaced by the COVID pandemic or entry-level workers who are earning less than middle-class wages and get them prepared for an industry sector that has average salaries of $60,000 to $70,000 a year.”

Promoting people of color and women

But for that to happen, Tucker said companies need to promote more people of color and women up the ranks. Banks and community lenders need to help them become owners.

Detroit’s Longordo believes it’s also up to business owners like her to try to minimize structural barriers to employment.

“There’s limitations for people of color, and I try to accommodate — whether it’s language, or transportation, being a single parent and needing more flexibility.”

Longordo hopes that will help her attract and retain younger workers of color, who can end up making upward of $50,000 per year in her shop, which is more than twice the median income in the Detroit.