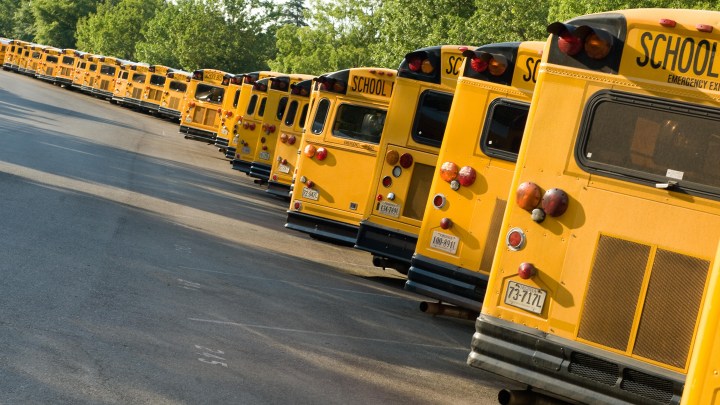 COPY
Some school districts are opting for a four-day school week to deal with rising diesel prices, one expert said. Paul J. Richards/AFP via Getty Images

Every school day, roughly 26 million kids board about 500,000 school buses, according to the National School Transportation Association. And the vast majority of those buses have diesel engines.

That’s turning out to be an issue now that the price of diesel fuel is up 50% from a year ago.

Schools are spending more than they thought they would on fuel, which comes on top of the struggle to find bus drivers in this tight labor market.

David Law, superintendent of the Anoka-Hennepin School District in the Twin Cities suburbs, has been playing a game of “connect the dots” with school buses for months now because there haven’t been enough drivers for existing bus routes.

“We have combined routes and doubled up routes,” he said. “Some kids have been getting home later. Our bus rides, the long end used to be 45 minutes, now it’s over an hour.”

On top of that, the district is feeling the increased price of fuel.

And that’s with the district splitting that cost with its bus contractor. Law has turned to reserve funds to pay the difference but said that if the high prices continue, the schools might have to let go of some counselors and social workers. “Because we … we have to find the money someplace.”

“Most school districts are just tapping into their federal funds, their federal relief funds, to pay that differential,” said Marguerite Roza, director of the Edunomics Lab at Georgetown University.

Districts are also opting to save fuel by going down to a four-day school week, she said.

“They’re trying to cram school into Monday through Thursday to save on one day a week on transportation.”

Some 40% of school districts contract their bus services, which means some small businesses are feeling the pain, too.

Dan Hillman’s company in south New Jersey has 140 yellow buses in its fleet, some of which drive up to 150 miles a day to multiple schools. The company pays for all its own fuel.

“You know, it’s not fun, but it’s an expense that, you know, it’s an unknown cost that continues to fluctuate just like everything else,” he said.