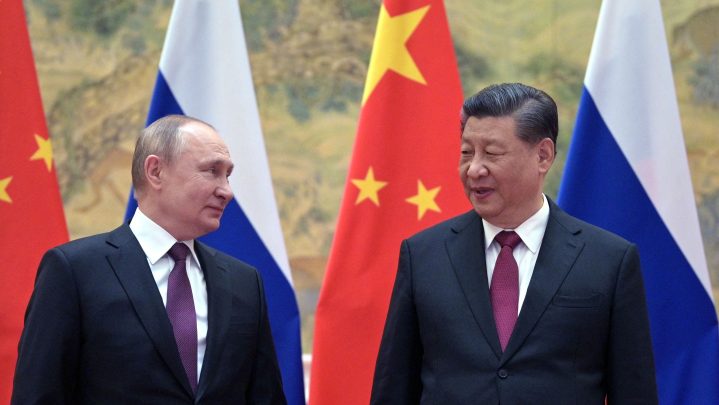 COPY
Several Russian banks have been excluded from SWIFT, the international financial messaging system. But Russia and China have their own versions of SWIFT. Above, Russian President Vladimir Putin, left, and Chinese President Xi Jinping. Alexei Druzhinin/Sputnik/AFP Getty Images

Several Russian banks have been excluded from SWIFT, the international financial messaging system. But Russia and China have their own versions of SWIFT. Above, Russian President Vladimir Putin, left, and Chinese President Xi Jinping. Alexei Druzhinin/Sputnik/AFP Getty Images
Listen Now

China’s economic clout means it could help Russia fill its needs as the West imposes sanctions on Russia’s economy. But on a call Friday between President Joe Biden and his Chinese counterpart, Xi Jinping, Biden urged China not to backfill the West’s sanctions against Russia. But the question of whether or not China can compensate for the West’s sanctions remains.

One way China could help Russia cushion the blow from Western sanctions is to keep trading normally with Russia, to the extent that it can. And Shang-Jin Wei, an expert on the Chinese economy at Columbia University, said China has ways to do that.

SWIFT is the financial messaging system that Russia was kicked out of after invading Ukraine. But it turns out China and Russia have their own versions of SWIFT, Wei said.

According to Dartmouth history professor Pamela Crossley, China been waiting for a moment like this.

“It’s been a long-standing ambition of Xi Jinping to develop all kinds of alternative structures relating to international finance and trade,” Crossley said.

But change isn’t easy. Take energy, for example. Russia could reorient its exports from West to East, said Mary Lovely, senior fellow at the Peterson Institute for International Economics.

“The Russians could send more gas to China. I’m sure China would negotiate a very good price on that,” Crossley said.

Russia’s problems aren’t limited to its exports. It also needs to import a lot of stuff, like semiconductors. Obviously, China can’t make everything itself. But it has experience serving as a sort of middleman for sanctioned nations like North Korea and Iran that can’t buy and sell goods directly, according to Victor Shih, an associate professor of political economy and China and Pacific relations at the University of California, San Diego.

“China has developed a tactic whereby they set up or use a small financial institution or a small firm to conduct these activities that are in violation of sanctions,” Shih said.

If those small firms get caught and hit with U.S. sanctions, Shih said that wouldn’t affect the rest of China’s economy much.

With hundreds of billions of dollars in trade between the U.S. and China each year, both nations are likely to tread carefully.