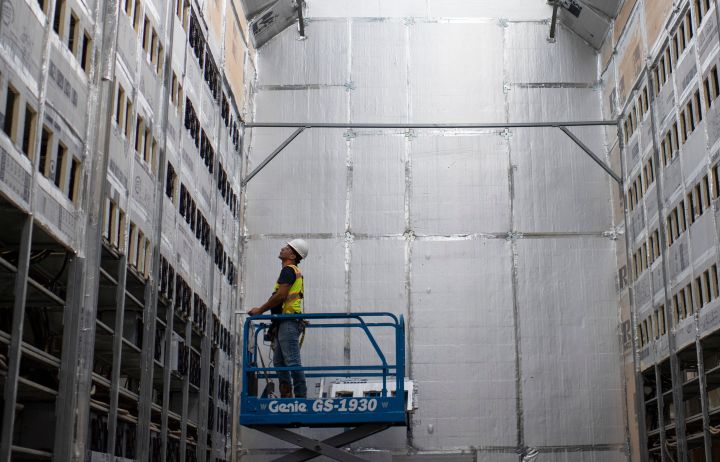 COPY
A worker installs bitcoin mining equipment at the Whinstone facility in Rockdale, Texas, in 2021. Mark Felix/AFP /AFP via Getty Images
Cryptocurrency mining and the environment

If there’s one thing that’s dictated the development of Rockdale, Texas, over the years, it’s energy.

Heath Davidson’s family is living proof. His dad went to high school there.

“Once he graduated — I think he graduated in ‘76 — he graduated and right that summer, he went directly to the coal mine,” Davidson said, the giant lignite mine just north of town. Davidson’s dad started out operating a bulldozer.

It’s not surprising that after Heath Davidson came back home with a degree from Texas A&M, he went to work at the Sandow Power Plant in town where the coal his dad mined generated electricity.

“I was working on a turbine generator, working on, you know, the scrubber and things like that,” he said. “My uncle, who is my dad’s brother, was actually our control room operator.”

But five years later, in 2018, the owners of the power plant shut it down. The Obama administration had cracked down on plants that burned dirty lignite. That eliminated about 450 jobs, including Heath Davidson’s.

It was yet another blow to the economy of a town that had suffered quite a few of them.

Then, it seemed like a lifeline was coming to town. A Chinese bitcoin mining company saw the potential of cheap energy in Rockdale — thanks to the state’s deregulated energy market — and was setting up shop near the shuttered power plant.

“They said they were going to bring a whole bunch of jobs,” Davidson said. “And I actually interviewed with them, and went through an interview process with them, and then they just weren’t hiring.”

Rockdale, Texas, was getting its first taste of just how volatile cryptocurrencies can be. The price of bitcoin tanked, and the Chinese company scaled back its plans.

Wired magazine got wind and called Rockdale “The Hard-Luck Texas Town That Bet on Bitcoin — and Lost.” It was an article that caught the eye of a bitcoin entrepreneur in New Orleans.

“I read it as opportunity,” said Chad Harris, CEO of Whinstone US, which is now part of the publicly traded company Riot Blockchain. “I was like, ‘Hey, if there’s power, there’s opportunity.’”

Harris started digging around for more information about Rockdale and remembers getting a text message with a picture of the Sandow Power Plant where Heath Davidson used to work.

“So I’m like, I literally see it. And I think of the rainbow in the Lucky Charms, right? And that’s like, holy cow. We have found it,” Harris said.

It wasn’t that Harris wanted to reopen the power plant, but he saw that it was still alongside massive electrical infrastructure: transmission lines, switching stations and transformers.

It was the perfect place for another new cryptocurrency mining plant, one that he says will ultimately eat up some 750 megawatts of power — enough electricity for more than a third of a million homes.

All of that infrastructure had been built to serve what was once the largest aluminum smelting plant in the country.

John King worked at the Alcoa plant before he became mayor of Rockdale.

“They came in probably in ‘51,” King said. “They built power plants to supplement what was necessary to do the smelting. Originally they had three 95-megawatt power plants out there.”

They were there because of that 100 million tons of lignite coal just north of town where Heath Davidson’s dad started working after high school.

“It provided the coal that they needed for an aluminum smelter, which needs huge amounts of heat and power, and you needed power in the form of electricity for that as well,” said Daniel Cohan, associate professor of civil and environmental engineering at Rice University in Houston. “And so it made a lot of sense to use that same coal to run a power plant next door.”

After Alcoa arrived, Rockdale’s population doubled. The Saturday Evening Post called it: “The Town Where It Rains Money.”

The smelting plant, the coal mines and the power plants employed thousands of people.

Then, in 2008, Alcoa said it was shutting down the smelter. All of a sudden, those jobs were gone.

An economic shock like that can often throw local leaders in towns like Rockdale into a headspin trying to figure out how to make up for the lost jobs and the lost tax revenue.

“The people that you talk to, the mayor, the economic developer, they’re trying to optimize their portfolio,” said Sarah Low, associate professor of regional economics at the University of Missouri. “And so it’s this trade-off: Do we maximize growth growing bitcoin? Or do we maximize stability?”

Rockdale’s answer to that question seems to be growth through bitcoin, which has changed the town’s priorities.

“It used to be the discussions were about, ‘Is the highway system good enough to support the trucks? Can the bridges handle the trucks coming in and out of the plants?’ And now much more of the discussion about is, ‘Do we have good enough internet service?'” said Ken Johnson, professor of sociology and senior demographer at the University of New Hampshire.

In addition to the Whinstone US mine, the Chinese firm that gave the town false hope a few years ago is back. Rockdale Mayor John King said the town gets two or three inquiries a week from cryptocurrency companies. The hope is that, ultimately, crypto will create a few thousand jobs here.

Heath Davidson already got one of them. A couple of years ago he was at a restaurant in town that his friend owns watching the World Series when he met one of the guys setting up the Whinstone US mine in Rockdale.

“And he said, ‘Hey, all I could tell you is, you know, put your application in and come hit the ground running,'” Davidson said. “And so I started out in inventory. And then I proceeded to go to the miner installation team. Then I became assistant supervisor. And then I ended up becoming a manager and now I’m director of operations.”

His dad rose through the ranks in the coal mine. Now, Davidson’s done the same thing at the bitcoin mine.

Clarification (March 29, 2022): This story has been updated to clarify the sequence of events leading to the closing of the town’s lignite mine.