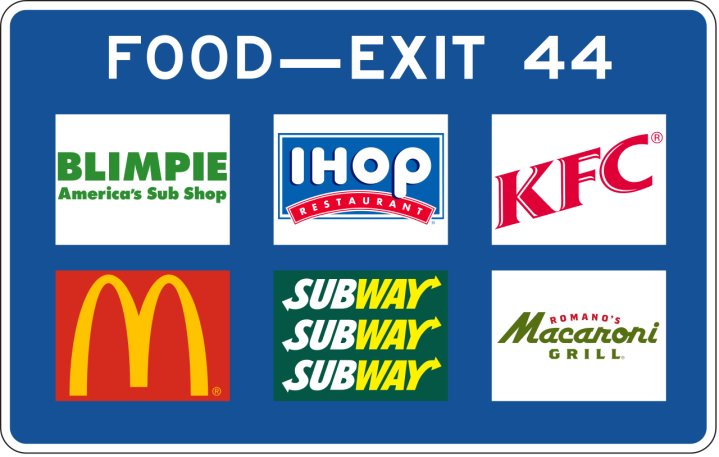 A sample of a blue highway exit sign, which are used throughout the U.S. Wikimedia Commons
I've Always Wondered ...

A sample of a blue highway exit sign, which are used throughout the U.S. Wikimedia Commons

How do businesses get their placards on the Gas/Food/Lodging signs on highways? Is that a form of advertising or is it a well-intentioned wayfinding tool? Who pays whom?

If you’re a driver in need of gas, food, or a place to rest for the night, giant blue signs on the highway will tell you the businesses nearby that can provide you with exactly these services.

These blue signs are part of the highway logo signing program, which a majority of states have adopted since the 1971 Motorist Information Act went into effect.

It’s an unusual form of advertising in that these signs are both a marketing tool for businesses and serve as a navigational tool.

How do businesses get on these signs?

The federal government has a list of rules and regulations for signage on the highway, including these blue signs, which are issued through the Manual on Uniform Traffic Control Devices, according to Kelly Mero, the publisher of Arizona Highways Magazines and the CEO of Grand Canyon State Logo Signs, which administers the Arizona Logo Sign program.

Mero said within these federal rules, a business must generally fall in one of six categories to be featured on the blue sign: gas, food, lodging, camping, attraction, or pharmacy. (California, however, has its own separate electric vehicle charging category.)

And each of these categories has its own specific rules, Mero added. For example, those in the food category have to operate six consecutive days.

“If we have an open sign and a business comes to us, and they qualify within one of those six categories, we vet them and then let them know, ‘Here’s your annual rate,” Mero said. “And then pretty much from there, they go through a manufacturing process, and then the sign will go up.”

Each state’s department of transportation may handle its respective program, like in California and Arizona, although there are private contractors such as Interstate Logos that oversee dozens of other states’ programs, like Georgia, Nevada, New Mexico and New Hampshire.

While there are federal rules guiding these states’ programs, each state can set additional rules. In Georgia, restaurants must be operational by 11 a.m., while Oklahoma’s logo program makes no note of such a requirement.

How much do companies have to pay?

In California, businesses only have to pay hundreds of dollars to have their company featured on these highway signs, which include fees for permits ($160), rental ($310), service ($285 for mainline, $235 for off-ramp), and transfer ($175). Permit and rental fees are charged on an annual basis, while service and transfer fees are charged as needed.

Georgia charges businesses $1,000 to be featured along mainlines and $200 per ramp, with the possibility of additional fees.

And in Arizona, Mero said that the rate — which takes into account traffic —will depend on the area. On a typical interchange, he said the annual cost is $4,440. But the average rate can range from $1,104 in rural areas and up to $6,540 in urban areas.

Arizona also administers an auction program, using a “second-tier” form of bidding in cases where there are too many businesses trying to vie for a slot on the sign. So, for example, if one company bids $8,000, another bids $4,000, and a third bids $3,000, the top-bidding company will earn the slot and pay $4,000, while the second-highest bidding company will pay $3,000, and so on, explained Mero.

In total, there are about 2,000 businesses in Arizona’s program, which currently pulls in $5.5 million a year, according to Mero.

This money is given to the State Highway Fund, which has raked in more than $17.7 million since 2013. Mero noted that the program was initially administered by a private company based in Minnesota, before the Arizona Department of Transportation took over in 2013.

Just how useful are the blue signs?

While we now have cell phones to help us navigate an area, they’re still a convenient guidepost for drivers, explained Marla Royne Stafford, a marketing professor at the University of Nevada, Las Vegas.

Plus, she added, your phone might be out of range.

“It’s a very carefully placed advertising strategy, and one that does work, because it gives consumers information in a place where they need information,” Stafford said.

Stafford remembers relying on these signs more than a decade ago, when she was traveling with her son and parents through Wyoming on their way to Canada.

“We hadn’t even made a reservation. We figured we’d find a place to stay on the way and find food. Well, let me tell you, there was hardly anything on these roads,” she said.

They passed hotels that they weren’t sure were even still in operation, until they spotted the blue sign with a logo for Motel Six — a place they normally wouldn’t stay.

They ended up getting a room there that night.

“It was clean, it was comfortable, and we actually decided to make a reservation on the way back,” Stafford said.