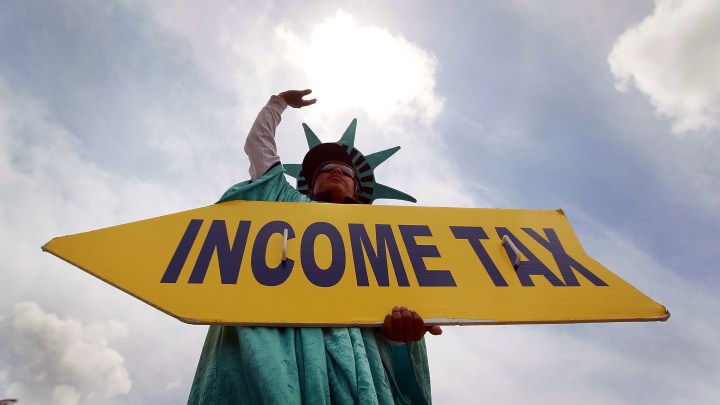 “Is it really worth paying someone to hold a sign, and why is that allowed when putting a sign in the ground is clearly not (or else presumable that’s what companies would do?)”

Holding giant cardboard signs, more than a dozen sign spinners stood at a Los Angeles intersection, trying to get drivers to honk, wave or smile at them.

“Get the black Jeep,” shouted the “spinstructor” (as they’re known) to a trainee.

“Now the gray minivan!” he yelled to the person next to him.

These men and women were at North Hollywood Park to learn the twirls and flips that take a spinner from a novice to a master. AArow Advertising, an agency that provides companies with spinners who’ll advertise your product, conducts sessions like these around the world.

Sign spinning is no fly-by-night operation. It not only boasts training practices and world championships, but has the potential to rake in millions of dollars a year.

But we wanted to find out if paying a human billboard to advertise your company actually works.

The psychology behind signs

Holding or maneuvering a cardboard sign may seem like an old-fashioned way of getting someone’s attention in the digital age, but our reliance on technology is precisely why it can be so effective.

“Marketers are always looking to get people’s attention, and people are increasingly getting distracted — they’re on their iPads, doing things while they’re driving,” said Ira Kalb, an assistant professor of clinical marketing at USC.

You could hire a human billboard directly, but there are agencies like Aarow Advertising — which has worked with companies like Whole Foods and H&R Block — that’ll supply you with workers. (“All of our spinners are covered with a million-dollar liability insurance, because it’s a crazy world out there,” said Justin Brown, director of training for AArow.)

And companies arguably gain a psychological advantage by hiring somebody.

“As drivers, we’re completely trained to notice other people,” said Charles R. Taylor, a professor of marketing at Villanova University.  “And when you put human interaction in marketing, in general it leads to more ability to appeal to people’s empathy and raise emotions.”

Brown from Aarow said another advantage of using a human billboard is the ability to target potential clients on the spot.

Breaking down the costs

Many companies find it cost-effective given how cheap it is to hire a human billboard compared to other forms of advertising like television. Plus, people who are holding an advertisement can make quick judgments about who might be more likely to purchase the company’s products, and approach them accordingly.

Mike Kenny, the COO of Aarow Advertising, said the company’s clients pay an average of $175 per day for its services (Aarow itself pays spinners an average of $13 an hour).

“A lot of people don’t understand that it’s more than just, you go grab the sign, do your tricks,” said Oshay Henderson, a “spinstructor” with Aarow who helps coordinate training practices. “There’s actual structure.”

“If somebody buys one house, there’s more than enough margin in there,” he said.

The same holds true for an apartment lease. If a one year lease brings in $24,000 in revenue, “with a sign spinner at the right place at the right time, we can create that interaction and create that impulse for somebody to walk in and sign that apartment that day, for cents on the dollar,” Brown said.

Using people for street campaigns is also a valuable investment for Liberty Tax Service, a company that helps with tax returns. Their “wavers,” as they call them, dress up in Statue of Liberty costumes, sometimes holding signs or sashes about the brand and its services.

Martha O’Gorman, Liberty Tax’s chief marketing officer, said that for every two hours a Liberty store has a waver outside, they typically get one customer. Wavers are typically paid between $8 and $10 an hour (including the possibility of bonuses), with the typical tax return netting Liberty between $250 and $300.

Using human billboards may not always line up with a company’s image, however.

Kalb said you may not see street signs from a fancy restaurant or a company that specializes in luxury goods because it can lower the brand’s prestige.

Some consumers might think, “If you need to go to this extent to attract my attention, you must be desperate,” he said. “The brand has to match the quality of the product that you’re advertising.”

But the tactic can be particularly useful depending on the circumstance, like if you’re a mom-and-pop shop that doesn’t have a big marketing budget, you’re a retail store in a hard-to-find location, or you have a big sale coming up, Kalb added.

As for the legal codes governing sign usage — both static signs and human billboards — it depends on the municipality. Some areas do permit signs in the ground as long as they follow certain codes. And cities actually have tried to crack down on human billboards before. Some have placed strict restrictions on sign spinners, like Tustin, California, which said they can’t “spin, twirl, swing or gyrate.”

Meanwhile others, like Huntington Beach, California, have placed outright bans, with one councilmember calling them a “form of visual blight.”