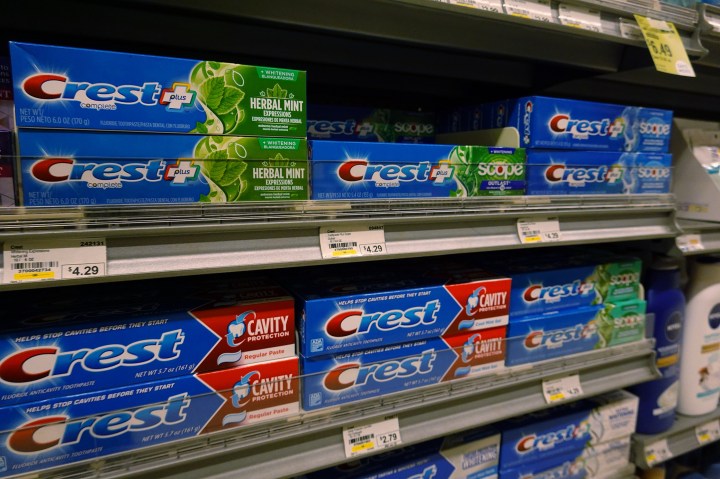 Boxes of Crest toothpaste boast the ADA seal. The product has to prove that it's legit. Joe Raedle/Getty Images
I've Always Wondered ...

Boxes of Crest toothpaste boast the ADA seal. The product has to prove that it's legit. Joe Raedle/Getty Images

Many people wouldn’t even think about buying a dental hygiene product that didn’t have the nice, big “ADA” logo on it to indicate that it was approved by the American Dental Association. That being said, what is the actual process to get ADA approval for your product and is it really that big of a deal?

In the hit 1990 movie “Home Alone,” Macaulay Culkin’s character asks a cashier whether a toothbrush is approved by the American Dental Association.

When the cashier says the product doesn’t say, Culkin asks her to find out, setting off a longer-than-expected conversation between the cashier and another employee about what to tell the young customer.

That scene inspired Hall to ask his question. In real life, that conversation wouldn’t take place because products that have been accepted by the association will bear the program’s seal, which was first granted by the ADA in 1931.

Now, more than 400 products, across 20 categories, have it, including athletic mouthguards, fluoride toothpastes and sugar-free chewing gums, according to the ADA. The association, 162,000-plus members strong, lobbies on behalf of dentists and provides resources that include a retirement program and insurance guides.

The organization’s website says 70% of people will choose a product with the ADA seal versus those without it if the items are “similar in nature and price — and a majority say they’d pay more for it.”

Major consumer goods companies, including Colgate-Palmolive and Procter & Gamble, and grocery chains such as Kroger and Publix, have developed products bearing the seal. You can find it on Crest Whitestrips and Colgate toothpaste.

Here’s how the review process works

To receive the seal, products must already be approved by the U.S. Food and Drug Administration, according to Dr. Matthew Messina, an ADA spokesperson, a practicing dentist and an assistant professor at the Ohio State University College of Dentistry.

Companies voluntarily submit their products to receive the seal. When applying for it, according to the ADA, companies have to:

The ADA’s Council on Scientific Affairs — which consults with scientists who have expertise in areas such as microbiology, pharmacology and toxicology —  will then review and evaluate these products.

The seal is granted for a five-year period, and companies have to renew it every five years.

A report from the Associated Press in 2016 said the ADA charges manufacturers $14,500 to evaluate their products. If a product is approved, the ADA will charge a yearly $3,500 fee. The ADA could not confirm by publication time whether these figures have changed.

What does the seal tell consumers?

Dr. Geoffrey Thompson, the program director in the postgraduate program in prosthodontics at Marquette University, said over email that sometimes products in the ADA’s seal program could have “increased efficacy” but that products without an ADA seal “may be just as good.”

Although nonseal products may also work well, ADA spokesperson Dr. Ruchi Sahota said the seal is valuable because consumers see an abundance of dental products as they “walk down that aisle of confusion.”

Sahota, who’s a dentist from Fremont, California, said that as a mom, she’s fine with whatever product her daughter will use and is happy with. But the ADA seal guarantees that the product meets certain standards.

“When I pick up that product and I see that ADA logo on it, I know that means this product has been rigorously tested, is going to do what it says it’s going to do and it’s safe and effective,” Sahota said.

Dr. Tyler Perkinson, a dentist from Richmond, Virginia, and co-owner of the Virginia Family Dentistry group practice, agrees that the ADA seal can be a useful visual shorthand for consumers.

When it comes to patients who ask for toothpaste recommendations, he said it’s easy to tell them to just look for the seal.

However, these products are already FDA approved. So what does the ADA’s additional blessing achieve?

“A nonseal product may work wonderfully,” Messina said, “but I can’t render an opinion on that because it hasn’t been independently verified.”

“Some oral health care products are classified by the FDA as ‘cosmetics,’ which has a completely different testing profile than something that’s classified as a medication — for obvious reasons,” Messina said. “Cosmetics are going to be studied just to make sure they aren’t going to hurt people. But the effectiveness claims are less rigorous.”

While some companies find the seal beneficial, the price point may be a deterrent for companies without the financial resources to pay for the review and acceptance process. Perkinson pointed out that a conglomerate like Colgate may be adept at navigating through the process, while a smaller brand may not.

Punam Anand Keller, a professor and senior associate dean at Dartmouth College’s Tuck School of Business, said, “It would definitely be something that a smaller company would have to consider more carefully than a larger company because of the economics.”

Keller said companies want to create competitive advantage for their products, and getting the Seal of Acceptance is one way of doing that.

However, the ADA’s finding that most consumers prefer products with the seal over those without it, controlling for similarities like price, raised questions for Keller. “What’s interesting to me is that it’s only 70% because if you look at rational consumer behavior, if the products are identical, and the price is identical, why wouldn’t 100% pick the one with the seal?” she said, adding the caveat that she hasn’t seen the study.

For those who don’t, Keller said, one reason may be that consumers don’t know what the seal means or aren’t familiar with it. Keller herself said she hadn’t heard of it, even though she owns “all kinds of dental products.” She also said consumers may think there’s a hidden cost, that the price may be the same but they’re getting less from the product.

Keller pointed out that such traditional “seals of approval” may have less sway over consumer behavior than they used to. Nowadays, consumers can easily look up products online and check out ratings from other purchasers to help them choose what to buy. She noted that younger consumers in particular are skeptical of authority, including the authority of a business organization.

“All of this was not available in the past. You relied more on authority to make the decision, and that’s not the case anymore,” Keller said.