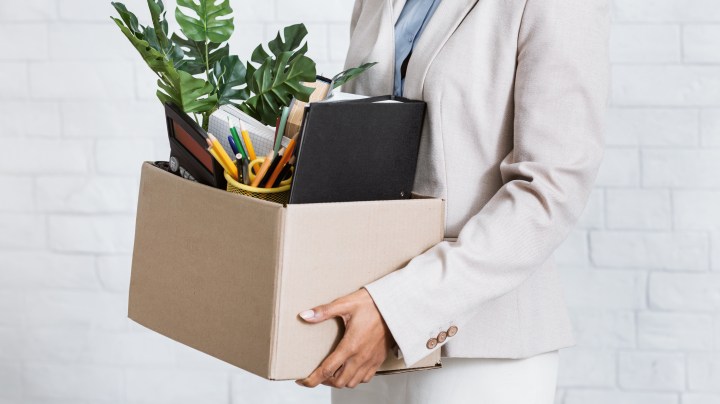 COPY
In a remote work environment, employees may have fewer social connections that may otherwise make them stick around. Prostock-Studio/Getty Images

In a remote work environment, employees may have fewer social connections that may otherwise make them stick around. Prostock-Studio/Getty Images
Listen Now

In December 4.3 million people quit their jobs, slightly below the all-time monthly high of 4.5 million people in November. Layoffs reached a low, as companies kept workers — even those they might normally be interested in firing — on the books.

Firms across the U.S. are trying something revolutionary: paying workers more.

So that’s what companies have been offering. Initially, for new hires.

“Opening offers were higher than ever before,” Alonso said. Two-thirds of companies surveyed this year said they’ve raised starting wages over the past year. Of those, about 40% say they raised starting pay for new people by 6% to 10%.

Obviously, existing employees had something to say about that. They eventually got raises too, though not as quickly as new people.

“Wage growth picked up faster for job switchers than for job stayers. It’s now picking up quite rapidly for job stayers as well,” said Julia Pollak, chief economist at ZipRecruiter.

Perhaps the next best thing after retaining people is luring them back. SHRM reports that about 40% of employers are paying something called “boomerang bonuses.”

The second and third leading reasons people leave, according to SHRM, are work-life balance and career advancement. Companies have been coming up with benefits that hit exactly those things.

“We have certainly seen an increase in interest in on-site childcare,” said Stephen Kramer, CEO of Bright Horizons, which helps employers with benefits, including childcare. Similarly, companies have been offering help with education for workers who want to get ahead.

ZipRecruiter also reports an increase in the number of postings mentioning retirement benefits. Some of this competition over salary and benefits is tied to the tight pandemic labor market.

Even when the labor market is back to normal, businesses are still going to be dealing with high turnover, warned Brian Kropp, chief of research at Gartner’s HR practice. “So if historically you had about a 10% turnover rate, you should really be planning to have a 15% turnover rate, all else equal, once we get fully through the pandemic.”

That’s a 50% increase in turnover rate, regardless of what the labor market’s doing. One reason: Many remote workers have the whole country to choose from, or at least somewhere they can get to every once in a while.

“More options means more turnover,” Kropp said. Social ties between coworkers can be weaker when more people are working remotely. “It’s easier to quit your job because you’re quitting your company but you’re not quitting your friends.”

Plus, turnover has been increasing over the decades. Glassdoor looks at the best places to work each year. The places that are likely to retain people have something in common, said Glassdoor CEO Christian Sutherland-Wong: “Each of these companies truly has a culture of caring about culture. They create a culture that’s mission-driven. They connect with their employees in being able to give them a sense of purpose in the work they’re doing.”

Once the bills are paid and the kids are fed, that’s what companies may be competing over next: a sense of purpose.