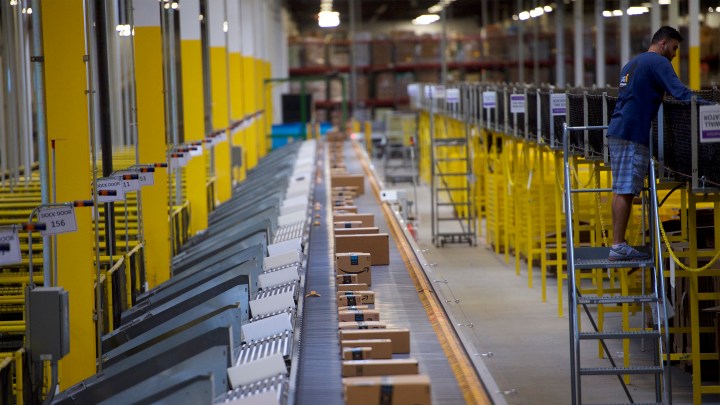 The latest Job Openings and Labor Turnover Summary showed the number of jobs open in the U.S. economy at the end of March rose by 346,000 from the previous month to 7.5 million. Meanwhile, the number of workers hired declined modestly and now stands nearly 2 million below the number of job openings. The labor market is especially tight in the logistics industry, where demand for workers has been rising, driven by both the structural shift to e-commerce and strong consumer and business spending at this late stage of the economic expansion. Job openings in transportation, warehousing and utilities rose by nearly 90,000 in March.

In regional logistics hubs like Louisville, Kentucky, with multiple large employers and fulfillment centers, competition for workers can be intense. Michael Gritton, executive director of workforce development agency KentuckianaWorks, said Amazon’s $15 an hour minimum wage, announced in late 2018, is driving competitors to raise wages and benefits to keep up with labor demand.

Still, Gritton said companies are having trouble finding enough workers to hire. His organization has been in discussions with employers to help them explore expanding their recruiting reach: “hiring more ex-offenders, trying to figure out transportation — because many of these companies are not located where the folks who still aren’t working would get a job from.” Gritton said providing child care assistance for employees working late shifts or overtime could help with employee attraction and retention as well.

Long-haul trucking companies and trade groups such as the American Trucking Associations, also complain of a growing labor shortage. The Bureau of Labor Statistics recently studied the market, and “pay and hours need to adjust to make the job relatively more attractive,” said report co-author Kristen Monaco. But, she acknowledged, raising pay dramatically could be difficult, as trucking companies typically operate at low profit margins. She suggested that improving working conditions for long-haul truckers could also help with recruitment and retention.

Jeremy Reymer, CEO of DriverReach, which operates an online truck-driver recruiting platform, said that there’s a limit to how much more trucking companies can afford to pay drivers to keep their fleets fully staffed.

“It’s not so simple as ‘Pay them all $100,000,'” he said. But Reymer said trucking companies can do a lot more to address work-life and family challenges for long-haul drivers, who often spend days or even weeks at a time on the road.

“Make sure that you’re compensating them when they’re laying over, especially for an extended period of time,” Reymer said. “Make sure you pay for all their time loading and unloading, and for all the miles they drive. It’s going to improve their ability to earn an income, but also it keeps them there. They’re happy because they know you’re on their side.”