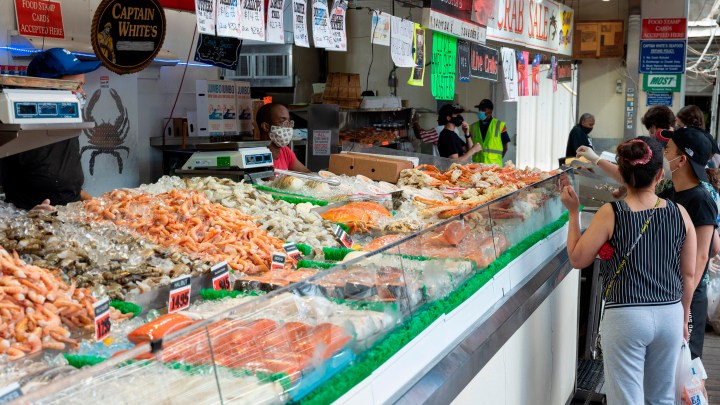 COPY
Togue Brawn of Downeast Dayboat says this year, her price for scallops has "gone up and down pretty drastically, even from week to week, which is a little unsettling." Jim Watson/AFP via Getty Images
My Economy

Togue Brawn of Downeast Dayboat says this year, her price for scallops has "gone up and down pretty drastically, even from week to week, which is a little unsettling." Jim Watson/AFP via Getty Images
Listen Now

High food prices are hurting households and restaurants alike. Grocery prices for meat, poultry, fish and eggs jumped 12.5% over 2021, according to the consumer price index. Restaurants are fighting inflation by getting creative with menus and portion sizes. But how do you run a business that supplies restaurants when your costs change month to month, week to week or even day to day? That’s what Maine’s fishing industry is dealing with.

Togue Brawn, a self-proclaimed “Maine scallop evangelist” and owner of Downeast Dayboat fishery in Bath, said prices for the mollusks have been “through the roof” recently. With fishing quotas, a scarcity in scallops and rising inflation across the country, top-quality scallops cost as much as $38 per pound.

Brawn said most of Maine’s fisheries are owned and operated by local fishermen. They are a key to Downeast Dayboat’s operation, which relies on crews who take their day boats out no longer than 24 hours and come back with scallops that Brawn said are “unparalleled.” She said trip boats, which catch most of the country’s sea scallops, are at sea for a week or more at a time and store their hauls on ice. When the ice melts, scallops absorb the water and lose taste.

Downeast Dayboat doesn’t have a warehouse; scallops are delivered fresh, as soon as the boat comes in. Brawn said her scallops sometimes cost three times as much as what you’d pay at a grocery store. Part of the reason is that she tries to get her fishermen a better price because they are “selling a premium product at a commodity price.”

Brawn sets her scallop price in November, and she said she tries to keep her prices consistent through the December to March season, but it’s difficult with so many factors involved. This year, she said her price has “gone up and down pretty drastically, even from week to week, which is a little unsettling, but that’s what you have to do.”

It’s a tricky situation: If she sets her prices too high, she can alienate her customers. But set the price too low, and fishermen aren’t getting fairly paid for their daily catches.

“Even two years ago, after COVID happened, [fishermen] were getting as low for small scallops as $8.50 [a pound],” she said. “And then, late summer, early fall, they were getting in the high 30s. So how do you set your price when you don’t know if it’s going to be $12 a pound or $37 a pound? It’s a little stressful.”

But she believes that people will pay a premium for a high-quality product.

“Hopefully I keep growing, because once people have tried my scallops, they honestly can’t get anything else,” she said. “I am on a mission to show the world what scallops are supposed to taste like.”

There’s another part to her mission.

“The biggest component of what I do is education, because until you know that … this level of quality exists, you’re not going to pay for it.”