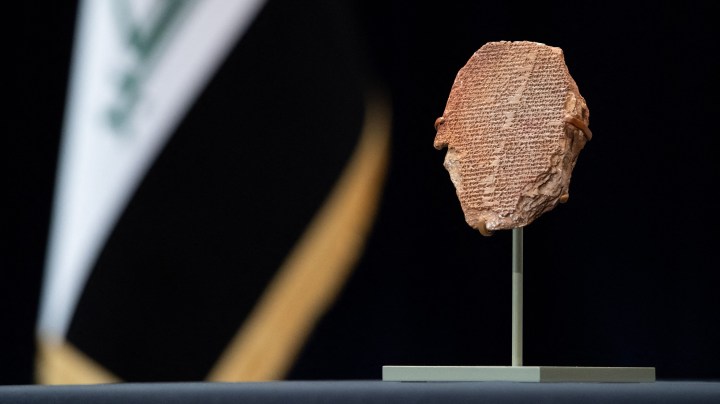 COPY
The Gilgamesh Dream Tablet, a 3,500-year-old cuneiform clay tablet, is seen at a Washington, D.C., repatriation ceremony in September. The tablet was looted from Iraq and trafficked in the United Kingdom. Saul Loeb/AFP via Getty Images

The Gilgamesh Dream Tablet, a 3,500-year-old cuneiform clay tablet, is seen at a Washington, D.C., repatriation ceremony in September. The tablet was looted from Iraq and trafficked in the United Kingdom. Saul Loeb/AFP via Getty Images
Listen Now

Opponents of Britain’s decision to leave the European Union have often wrung their hands and predicted a whole series of negative consequences. But here’s one that hardly anybody foresaw: that the United Kingdom might become a major center for the trade in plundered antiquities.

Among the EU laws that the U.K. has repealed in a bid to differentiate itself from the bloc following Brexit is a measure aimed at suppressing the trade in ancient objects stolen from war-torn countries, like Syria and Iraq.

Critics of the move claim that by scrapping this measure, the U.K. is in danger of further encouraging a trade that is already flourishing in Britain.

The most infamous recent example of a looted artifact was handed back to Iraq at a repatriation ceremony in Washington, D.C., in the fall: a 3,500-year-old clay tablet. Inscribed in cuneiform script, the Gilgamesh Dream Tablet, believed to be the world’s oldest surviving work of literature, was pillaged from an Iraqi museum during the first Gulf War.

It may have been seized and returned by the United States, but as Assistant Attorney General Kenneth Polite pointed out during the repatriation ceremony, the stolen tablet first surfaced in London.

The fact that this priceless object, which was eventually sold for $1.6 million to an American museum, was trafficked in London does not cause much surprise in the U.K.

“For various reasons, London has become an important center in this illicit trade,” observed archaeologist Mark Altaweel of University College London. He said the trade in looted artifacts — especially in lower-profile items like coins, mosaics and jewelry — has boomed in the British capital in recent years.

“Because it’s very much a global city, it’s a key point where traders and others have come to. Many people here have connections to other parts of the world,” Altaweel said, adding that — in his view — the laws banning the importation of stolen artifacts are not enforced rigorously enough in Britain.

“Now that the U.K. has left the EU and the EU has brought in much stronger legislation, the U.K. is going to be vulnerable because our legislation is much weaker comparatively,” Rogers said.

Unlike the EU, the U.K. doesn’t now require an import license to bring antiquities into the country, and anyone caught importing stolen artifacts can only be convicted of an offense if it can be proven that they knew the item was illegal, which is quite a high bar for prosecutors to clear. The disparity between EU and UK law is going to cause trouble, Rogers said.

“The problem with having Europe with a much stricter piece of legislation and the U.K. with essentially nothing comparable, it automatically makes the U.K. a gateway,” she said.

Her main anxiety centers on one of the most contentious features of the Brexit withdrawal agreement: the unique status of Northern Ireland. The British province retains a wide-open border with the Irish Republic, and therefore with the European Union.

Rogers fears that criminal gangs may ship looted objects quite easily into the U.K. mainland and then use Northern Ireland as a backdoor into the EU.

Over time, that backdoor is likely to become an even more attractive option for the smugglers as the EU tightens its controls on every other stretch of its external border.

Neil Brodie, an archaeologist with Oxford University, believes that the EU will enact further measures aimed at discouraging this illicit trade. Two of the key member states demand nothing less.

“The European Union includes countries such as Italy and Greece, which historically have been subject to quite heavy looting and the theft of their cultural objects, their antiquities,” Brodie said. “These countries have a long history of being victims of this trade, and their opinions and policy priorities will always be taken on board by the EU.”

The Greeks have been at loggerheads with the Brits for decades over this very issue. The government in Athens recently stepped up its long campaign for the return of the greater part of the Parthenon’s marble frieze, which it says the U.K. stole in the early 1800s and now resides in the British Museum.

The Brits, said Brodie, seem to have a bit of a blind spot when it comes to the trade in looted artifacts.

“We have a history — in a way — of benefiting from it culturally and financially. So the urgency and the impetus isn’t there to act against it in the way the Europeans will,” Brodie said.

In a statement, the British government said: “We remain committed to combatting illicit trade in cultural objects and believe that existing U.K. law is sufficient to deal with this issue.”

But the campaign to toughen up the U.K. law goes on.

The campaigners argue that a crackdown is imperative as the illicit antiquities trade causes so much damage, not least providing finance for terrorist groups like the Islamic State and al-Qaida.

“This trade is one of the top earners for these violent groups, and they use that money to perpetuate that violence, buying more arms, buying more weapons, recruiting more people,“ said archaeologist Altaweel, who’s worked on excavation sites in northern Iraq.

“This trade also damages our knowledge. It destroys the context in which these items were found,” he said.

Altaweel has a keen personal as well as academic interest in Iraqi artifacts. He was born in Baghdad and left at the age of 7 when his parents migrated to America. He believes that the theft of antiquities undermines the cultural cohesion of war-torn countries like Iraq and further hobbles their chances of recovery.

“There’s a loss of the kind of things that can help heal societies and bring cultures together,“ he said.

At that repatriation ceremony in Washington in the fall, the Iraqi Minister of Culture Hassan Nazim made the same point as he took possession of the Gilgamesh Dream Tablet and scores of other looted artifacts that the U.S. authorities had seized and were handing back.