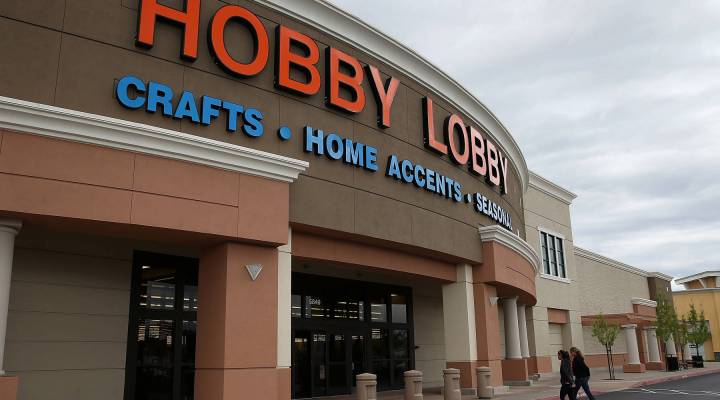 In antiquities news today, Hobby Lobby agreed to pay a $3 million fine and forfeit thousands of illegally trafficked artifacts. Federal prosecutors in Brooklyn say the craft store and its owners, the Green family, illegally smuggled questionably obtained ancient cuneiform tablets and clay bullae into the country. Emma Green (no relation to Hobby Lobby’s owners) covers politics, policy and religion for The Atlantic. She talked with Marketplace host Kai Ryssdal about the details of this case. The following is an edited transcript of their conversation.

Kai Ryssdal: Remind us, would you, who the Green family is what Hobby Lobby is and why they would want 3,450 cuneiform tablets and, you know, other stuff?

Emma Green: So typically, you go into Hobby Lobby not because you’re seeking out ancient antiquities from Iraq, but because you want some craft supplies and glitter. It’s a major craft store supply chain that’s around the United States. The Green family owns it. But since about 2009, Hobby Lobby has been investing in its antiquities collection, and this tends to be around Christian artifacts. They’re evangelical Christians, and they collect Bibles and other kinds of Christian artifacts from ancient times. This case centers around something a little bit different. These are cuneiform tablets that are from modern-day Iraq, and they just generally fit into the Green family’s interest in antiquities.

Ryssdal: The catch here, as you say in your piece in The Atlantic about this case, is that the provenance of these pieces, their origin is — and this is your word — muddy.

Green: This is the key. Tracing the provenance, making sure that the supply of this object going from year to year to year was always transferred in a legal way, was never stolen or smuggled or sort of smudged and covered. And what happened here is that the Green family — Hobby Lobby — was trying to engage with a set of dealers who issued a certificate of provenance that appears to be kind of dodgy. There’s lot of unclearness about how they actually came to be in the United States when they were and what their origin actually is.

Ryssdal: Can we detour here for a second to how they might have been removed from Iraq and that region in the first place, and who might be profiting from this sale. I mean it was a million and a half dollars.

Green: It’s a huge sale. And moreover, these kinds of objects are really priceless. They have been looted consistently from places like Iraq, but especially Iraq. In recent years, this has become even more high pressure and had a lot of law enforcement scrutiny on it because groups like ISIS have been looting cultural sites and selling artifacts, in part to finance their military efforts.

Ryssdal: The company and the Green family have apologized. They have made restitution. They have surrendered these objects. But it bears a mention here that as they were being imported, and part of the reason the feds caught on to this, is that they were marked as samples of imported things for the Green family, and there were a disparate number of suppliers used to conceivably muddy the tracks where this stuff came from.

Green: As the complaint noted, there’s a lot of techniques that people will use when they’re trying to evade inspections by customs. And what the dealers did in this case were first, as you mentioned, falsely label the packages. They falsely put the origin in Turkey when that was not the case, and they sent the packages to multiple different shipping addresses to give the illusion that it was being sent to multiple different buyers. All of these are some of the hallmarks and red flags of smuggling operations.

Ryssdal: What happens now to these artifacts? Do they get sent back to Iraq? Do they go into some federal warehouse here like “Raiders of the Lost Ark” or whatever?

Green: So, this is a civil forfeiture case, meaning the United States government has taken up these artifacts and objects. I assume there’ll be some sort of effort to try to return them to their original rightful owner but that in itself can be really complicated. But meanwhile, one of my favorite things about this is that in civil forfeiture cases, the title of the case is actually named for the objects that are being forfeited. So, this case is called, The United States of America v. Approximately Four Hundred Fifty (450) Ancient Cuneiform Tablets; and Approximately Three Thousand (3,000) Ancient-Clay Bullae.

Ryssdal: The law is great.