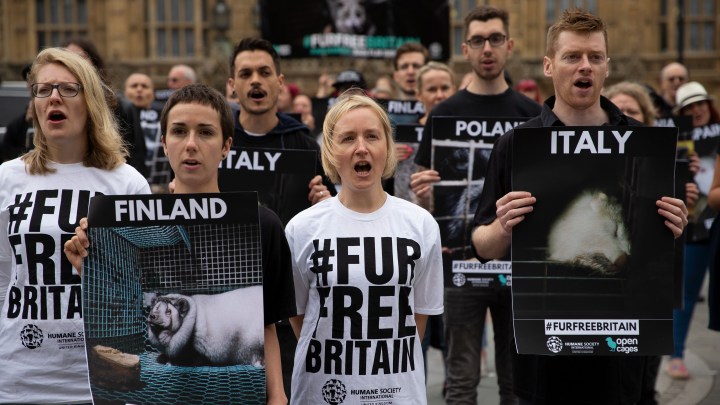 In a little more than three weeks, Brexit should finally become a reality.  After voting to leave the European Union in 2016, the Brits will finally, at the end of this month, get to break free from the bloc’s regulatory orbit, take back control of their own political and economic destiny, and strike their own trade agreements, including one with the United States.

But while the United Kingdom will be free after Brexit to forge closer links with the U.S., there are obstacles to a full-blown free trade agreement between the two countries.

The most frequently cited stumbling block is the U.K.’s refusal to accept the importation of American farm produce like chlorine-washed chicken, hormone-treated beef and genetically modified crops.

Another problem could be fur. Some British government ministers want to ban the sale of all natural fur, including mink and fox from the U.S., and that is raising American hackles.

Feelings about fur run high in the U.K. The British government banned fur farming on animal welfare grounds almost 20 years ago, but it was unable to ban imported fur because this would have clashed with its obligation as an EU member state to accept the product from other European countries. Claire Bass of Humane Society International said Brexit now provides an opportunity to end this anomaly.

“Fur farming was banned in the U.K. because it is inherently inhumane, but since then we’ve had this double standard. We’ve been importing the same product that we banned in our own backyard,” Bass said. “Leaving the European Union and the single market means we can end that double standard and stop funding the fur trade.”

The British government appears to be veering in that direction and is mulling a total ban on all fur sales in the New Year.

The British Fur Trade Association is mounting a rearguard action. The trade body denies that harvesting fur entails animal suffering, insisting that all of the $270 million worth of fur imported into the U.K. every year comes from farms or from trappers that are subject to strict animal welfare regulation. Giles Roca, head of  the BFTA, said a government ban would be an unwarranted attack on a successful industry.

“The U.K. is the seventh largest importer of fur in the world. It is a buoyant, successful, growing market. Sales have increased around 180% in the last decade or so,” Roca said.

Banning natural fur, he said, would not only hit the fur trade. In a letter to the BFTA, the U.S. ambassador to the U.K. suggested that since a British ban would block fur imports from the U.S., that could jeopardize any free trade deal with America.

“I think the U.K. government has to reflect very carefully whether it wants to move forward with this, potentially damaging a future U.K.-U.S. trade agreement that could be worth billions every year,” Roca said.

Anti-fur trade campaigners pour scorn on the claim. Mike Moser was once a fur trade champion — he was head of the BFTA — but he quit last year because of concerns about animal welfare. Moser does not believe that a fur ban in the U.K. would thwart a free trade deal with America. For one thing, the U.S. exports barely $3 million worth of fur a year to Britain.

“Such a miniscule amount,” Moser said. “I really, really can’t see that is going to be a feature of any trade agreement.”

But the fur trade has its supporters. Victoria Hewson, of the free market think tank the Institute of Economic Affairs, said a fur sales ban could not only undermine the chances of a U.S.-U.K. deal, it would be a bad idea, just as the U.K. launches itself as a global trading nation.

“I think it really could cause damage to our image and reputation as a supporter of free trade,” Hewson said.

“Many potential trade partners — and not just the U.S. — might worry that the future sale of goods could be subject to this quite arbitrary ban in the future,” she said. Hewson believes that this is a matter that should be left to the individual conscience of the consumer to decide whether or not they want to buy and wear natural fur.

Anti-fur trade campaigner Mike Moser protests that some issues cannot be left to the conscience of the individual consumer.

“For example, we don’t trade in endangered species and we don’t trade in goods that we know are linked to child labor,” Moser said. “The U.K. government should take leadership in this area and say, ‘We’re going to stop the importation of fur because of animal welfare concerns.'”

The argument goes on, and is likely to intensify and widen into other areas of commerce, as the U.K. becomes a fully independent nation again and gets to decide its own trade policy.