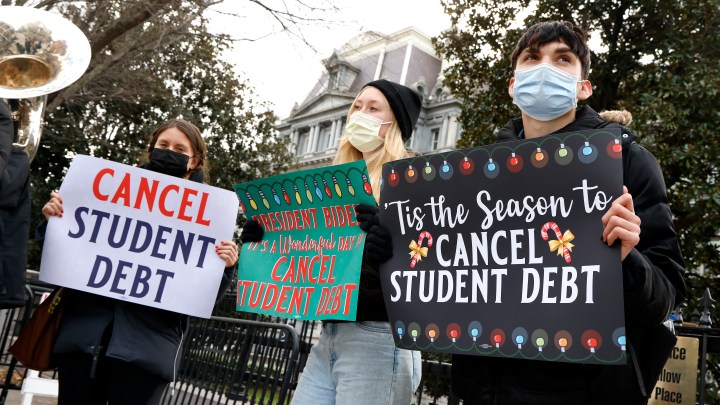 It has been almost two years since most people with federal student loans had to make a payment. In March of 2020, as part of the response to the pandemic, the federal government put those payments on pause and temporarily set the interest rate on student loans to zero.

But at the end of January, both interest and payments are set to resume for more than 40 million people.

Not having to make those payments for the last 21 months allowed Pechacek, 24, to move out of her parents’ house, pay off some medical bills and stop using her credit card so much.

“I’ve become much, much more independent without having to pay that every month,” she said.

Even though she also has a new job as an administrative assistant at a K-12 school in Seattle — where she’s making more than she did before as a baker — she still has a lot of medical bills that she’s trying to pay down.

“So I’m not feeling great about student loan payments coming back.”

Where the money has been going

About 75% of people with federal student loans say that having to make payments again will have a negative impact on them financially, according to a recent survey from Bankrate and BestColleges.

“The federal student loan forbearance program was extremely helpful for borrowers,” said Sarah Foster, an analyst at Bankrate. “A lot of them used this as an opportunity to continue paying things that were essential in their budgets.”

About 40% of borrowers said they used money they otherwise would have put toward student loans to pay for household bills and other everyday expenses. About 30% used it to pay down credit cards, medical bills and other debt, and about 25% put it toward rent or their mortgage.

“The pause was massive,” said Christopher Gaunya, who got laid off from his job as an acupuncturist at a hospital a few months into the pandemic. “Because I was able to kind of maintain my head above water for the course of the pandemic.”

At 59, Gaunya still owes about $143,000 in student loans, in part because the interest rate on his loans is more than 8%. So even though he’s been paying hundreds of dollars a month for years, his balance has grown.

“And in the last two years, all of a sudden, that payment just goes away, and I was able to do things like maintain my car and pay my rent and not see my savings account get drained, and still be able to put some money toward my retirement,” he said. “It was literally like the elephant got off my chest.”

The fact that people’s loans weren’t accruing interest at 4%, 6% or 8% was maybe even more significant than the payment pause, according to Betsy Mayotte, president and founder of the Institute of Student Loan Advisors.

It meant their balances weren’t growing while they weren’t paying, and it gave people who could afford to make payments a chance to really make a dent in their loan balances.

“What I was hearing from borrowers was, ‘Listen … the interest rate doesn’t make me feel like I’m on a level playing field. And having the 0% interest at least made me feel like I was on a level playing field,’” Mayotte said. “I’ve seen borrowers who have taken advantage of the 0% interest rate and have been throwing every penny they can at their student loans to reduce the principal or outright pay them off.”

She’s also heard from a lot of borrowers who have used this time to build up their emergency savings — some for the first time.

“What they did with these waivers was needed,” Mayotte said. “And it was far beyond any type of student loan relief I’ve seen in my career.”

Christopher Gaunya is still hoping for some amount of student loan forgiveness, though there is no indication that it’s coming.

So he’s also getting ready to start paying his loans again in about a month. And though he’s not looking forward to it, he’s glad it’s happening now rather than a few months ago.

“I feel like I’ve got a solid situation to kind of face this,” he said.

After a year and a half of being unemployed and underemployed, this month he finally found a new full-time job as an acupuncturist at a Veterans Affairs medical center in Massachusetts, making more money than he did before.

“It’s perfect timing,” Gaunya said with a laugh. “Just in time to pay my student loan.”