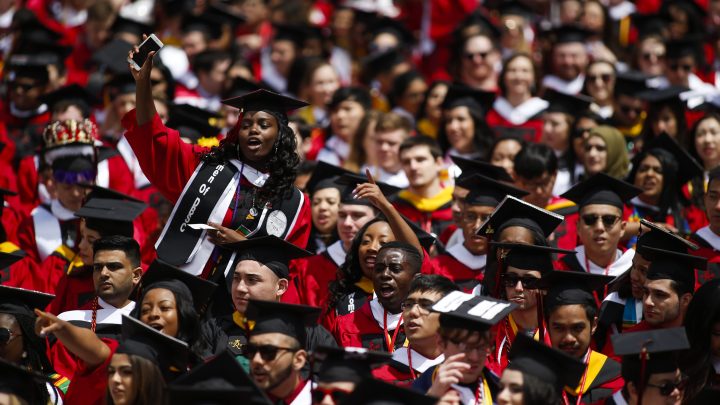 One major piece that’s been missing from the coronavirus relief packages so far is debt relief for consumers. With one exception — student loans.

As part of the $2 trillion CARES Act, people with federally held federal student loans are getting an automatic forbearance until the end of September. And during that time interest will not accrue.

When Krista Pechacek saw the news, “It was a huge relief for me,” she said. “Because there was no way I was going to make those loan payments if that hadn’t happened.”

Pechacek, 22, lost her job as a baker in the Seattle area a few weeks ago, and has been struggling to pay her bills. She applied for unemployment but is still waiting on her first check, and so far has been getting by with the help of family, friends and the kindness of strangers on Twitter.

So seeing the news that she not only wouldn’t have to pay her $400 student loan bill for six months, but that she also wouldn’t accrue interest, was a big deal.

“But I was looking into it further,” she said, “and it was just a little bit confusing how it was all going to work.”

It’s confusing to David Sorrell, too. He has $84,000 in student loans — a mix of federal and private — and a whole bunch of questions like, why hasn’t he heard from his loan servicers? Does he have to do anything to get the relief? Could loan forgiveness be on the table going forward?

Betsy Mayotte has, for years, spent hours and hours a day answering people’s questions about student loans, as president of The Institute of Student Loan Advisors.

Until a couple of weeks ago, “probably 60% of our questions were related to public service loan forgiveness,” she said. “Then it was like someone flipped a switch, and now the vast majority of our questions are related to the various waivers and options for relief that some student loan borrowers have been offered.”

What does the CARES Act do about student loans?

All federally held federal student loans are temporarily suspended and interest will not accrue through Sept. 30. The suspension is retroactive to March 13.

Do my loans qualify for this temporary relief?

Most federal loans qualify, but not all.

To get the automatic relief, your loan needs to be both federal and federally held — meaning your lender is the federal government, and not a bank or other commercial lender.

So which loans qualify?

— All direct loans — those taken out since 2010 — qualify. This includes direct Parent PLUS loans.

— Most Federal Family Education Loan Program or FFEL loans — those taken out before 2010 — do not qualify. There are some exceptions.

— Most Perkins loans — held by a college or university — do not qualify. There are some exceptions here too.

Those exceptions are for the 10 or so percent of FFEL loans — and the handful of Perkins loans — that the Department of Education bought back from other lenders during the recession. Those qualify.

“If you have a direct loan, you don’t have to ask any more questions. Your loans are eligible for these waivers,” Mayotte said. If you have a FFEL or Perkins loan, and “you’re in the lucky minority where your loans were purchased by the Department of Education at some point, then it’s possible that your FFEL or Perkins loans could also be eligible for these waivers.”

If you’re not sure what kind of loan you have, you can ask your servicer or log in to StudentAid.gov and look at your lender.

My loan qualifies. Do I have to do anything to get this relief?

No. It will happen automatically, you don’t have to ask. If you haven’t heard from your servicer yet, don’t worry.

“I counsel people to be patient,” Mayotte said. “Know that when the waivers are applied they will be applied retroactively to [March] 13. I wouldn’t stress out about it until at least maybe the 15th of April. Give your loan holders a chance to breathe and get those waivers put in.”

It is worth keeping an eye on your loan statements in the coming weeks though, Kantrowitz said, “to confirm that the interest has been paused, and also confirm whether or not a payment was automatically debited. If there was a payment debited, you can ask for a refund.”

My loan does not qualify. Do I have any options?

Yes. What those options are depends on what kind of loans you have, and on your financial situation.

If you have federal loans and you’ve recently lost work, the first thing to do is apply for an income based repayment plan if you’re not already in one, or recertify your income if you are.

“For those not in default,” Mayotte said, “if their income has been significantly reduced, it’s possible they could qualify for a zero dollar payment.”

If that doesn’t apply to you, you can call your lender and ask for a forbearance or an economic hardship deferment.

Another option, Kantrowitz said, is if you have ineligible FFEL or Perkins loans, “you can convert these into eligible loans by consolidating them.”

There are things to consider before you do that — primarily that consolidating might reset the clock on any loan forgiveness plan you’ve been working toward. But if you think you might want to do it, Kantrowitz recommends looking into it now, because loan consolidations can take some time to process. And for now at least, the pause on student loan payments and interest only lasts until the end of September.

If you have private student loans, your best option is to call your lender.

“I do know that many lenders are trying to be as flexible as possible during this sort of weird time that we’re in,” Mayotte said. “So absolutely make the call rather than just going radio silent and letting the loan negatively affect your credit.”

What if I’m pursuing Public Service Loan Forgiveness? Do I need to keep paying?

If you’re working toward PSLF, these six months will count toward your 120 payments, even if you don’t pay a dime. As long as you’re still working full-time for an eligible employer.

“The great news,” Mayotte said, “is they’re going to treat this period of time like you were actually making payments.”

Given that, there is no incentive for you to make payments right now, according to Kantrowitz. “If you make extra payments, it’s going to reduce the amount of your forgiveness.”

What if I’m in default?

All collection efforts are on pause until Sept. 30. That includes wage garnishment and tax and Social Security offsets.

If you’re currently pursuing a loan rehabilitation program, you do not have to continue making rehabilitation payments. You will still get credit for these next six months as if you had been paying.

“It’s great,” Mayotte said. “You’re not going to have to wait any longer to rehabilitate your loan just because of these waivers.”

I still have a job and can afford to keep making payments. Should I?

It depends on your circumstances.

“There’s no one blanket answer,” Mayotte said, who is getting that question a lot lately.

Both she and Kantrowitz recommend tackling your highest interest debt — maybe that’s a credit card, or a car loan — and building up your savings first. Particularly given that no one knows how long the pandemic, and the ensuing economic fallout, will last.

But if you don’t have other debt, and you have a solid emergency fund? Then, Kantrowitz said, “I would throw every dollar you can at that zero percent loan.”

Because, for once, you won’t be battling interest, and you’ll just be chipping away at the principal.

“For those people,” Mayotte said, “I would call that a gift.”

Could there be more relief coming? Is student loan forgiveness on the table?

Given how quickly everything is changing these days, it’s possible that more help for student loan borrowers could be included in future relief packages.

At the very least, Mayotte said, “I think there needs to be parity amongst at least all the federal loan programs.”

There are advocates and lawmakers pushing for that — for all FFEL and Perkins loans to be treated the same as direct loans. There is also a push for some kind of broad relief for those with private loans, too.

As far as actual loan forgiveness, though?

“I don’t think we’re in a political place for that to happen,” Mayotte said. “My opinion is that I think it’s way more likely that Congress would use those dollars towards health care and unemployment and small business and getting the economy back up.”

Where can I get more information?

— StudentPandemicAid.com is a free, regularly updated guide for anyone with student loans who’s been affected by the pandemic and is looking to understand their options. It’s a partnership between TISLA, Mapping Your Future and Decision Partners.

— The Consumer Financial Protection Bureau has this FAQ on navigating student loans during the pandemic.

— StudentAid.gov, from the U.S. Department of Education, has this information page for students, borrowers and families. Here, too, you can log in and check your lender.

— The Student Borrower Protection Center has a webinar on student loan repayment options and lists of both state and federal resources.