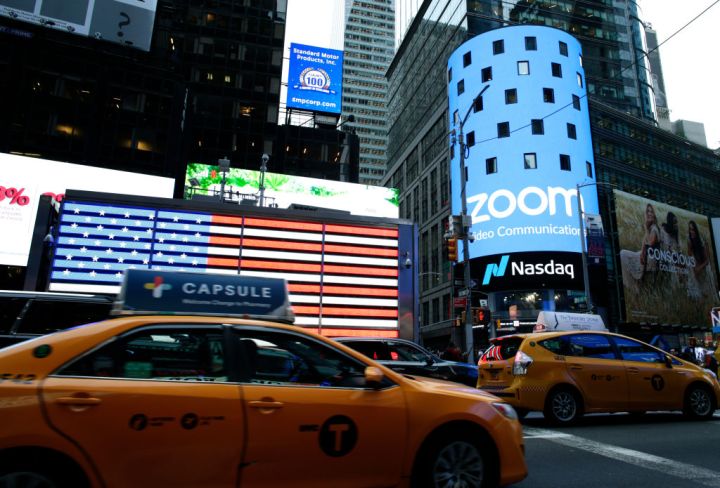 COPY
People pass by the Nasdaq building as the screen shows the logo of the video-conferencing software company Zoom after the opening bell ceremony on April 18, 2019 in New York City. Kena Betancur/Getty Images

People pass by the Nasdaq building as the screen shows the logo of the video-conferencing software company Zoom after the opening bell ceremony on April 18, 2019 in New York City. Kena Betancur/Getty Images
Listen Now

You’ll soon be able to make charitable donations directly through Zoom. The video conferencing platform announced the move along with their quarterly earnings on Monday.

The business is partnering with fundraising company Pledge to embed its app in Zoom calls.

With some workers going back to the office in person video tele-conferencing platforms are trying to offer new features to stay competitive.

Zoom’s new donation option is meant to be part of a fundraising event, almost like a gala on screen, said James Citron, CEO of Pledge.

“Once someone donates, they actually get the virtual background showing that they’ve donated. It creates this kind of social pressure and collective effort,” he said.

How much this works depends on who’s on the call, but Citron said Zoom was interested anyway. He said the company expanded fast and people wanted to see more from it.

“Zoom realized that they can’t build all the innovations in house,” he said.

Her research found that video isn’t even helpful a lot of the time.

“Collaborators are actually slightly more collectively intelligent, on average, when they are collaborating via audio only,” she said.

That’s a challenge some conferencing apps are tackling by offering new feature, like whiteboards or even gamified virtual offices.

And Woolley said there’s increasing burnout on the social side of video calls.

“And at first, at the beginning of the pandemic, people thought it was very novel to get on to Zoom with their friends. And now it’s a little like, ‘Oh, God, not Zoom,'” she said.

This is partly why Zoom can’t depend on its existing pandemic customers, said Gartner analyst Mike Fasciani.

“In order for them to continue to grow, they have got to start getting into additional market segments, where they haven’t been sort of relevant before,” he said.

Fasciani said on the recreational side, Zoom’s working on virtual events with admission paid through the app, like concerts and yoga classes. And, he said, employers are reevaluating their digital infrastructure as they consider indefinite remote work plans: How much to use Zoom? What about Microsoft Teams?

“Can they get by with just one? Or do they need both? And if so, how much of which?”

Fasciani said we can’t expect too many new Zoom users – what matters is if new offerings can keep existing ones there.