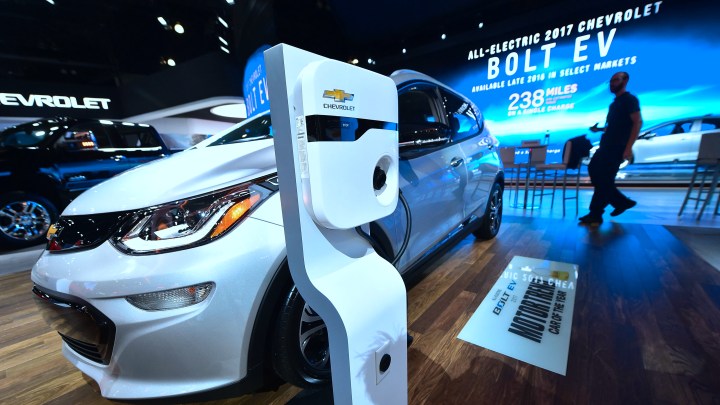 COPY
A Chevy Bolt electric vehicle on display at a 2016 auto show. General Motors is recalling the car after at least 10 documented battery fires. Frederic J. Brown/AFP via Getty Images

General Motors is recalling the Chevy Bolt, one of the more popular electric cars in America, because of a manufacturing defect that’s caused its batteries to catch fire at least 10 times.

Only 2% to 3% of cars sold in the U.S. are electric, but manufacturers and the Joe Biden administration have set targets well beyond that, saying electric vehicles are the future. What does the recall mean for the EV market?

First, some context: There have been 10 confirmed Chevy Bolt fires over the past five years. But “there are over 20 vehicle fires every hour of every day,” said Chris Harto at Consumer Reports.

“So, from that perspective, like, the Chevy Bolt is certainly no more risky than the vehicle you currently have,” he said.

Now, the risk can be different for electric cars and gas-powered ones. With an internal-combustion engine, you’re carrying around highly flammable gasoline that can cause fires while you’re driving, per Joseph Schofer, an engineering professor at Northwestern University.

“On the other hand, it’s much less likely that a car with an internal-combustion engine is going to catch fire in the middle of the night in your garage,” Schofer said.

That has happened to electric cars while they’re charging. GM said it is working out these issues and repairing existing Chevy Bolts — and that its new electric car models will have a different battery design.

“People are just getting comfortable with electric vehicles,” said Sam Fiorani, a vice president at AutoForecast Solutions. “So any sort of issue tarnishes the idea of an electric vehicle to the customer.”

People will often accept risks posed by things they know, but not things that are new to them. But Fiorani thinks it’ll be forgotten in the long term, he said, like a lot of the recalls of gas-powered cars.