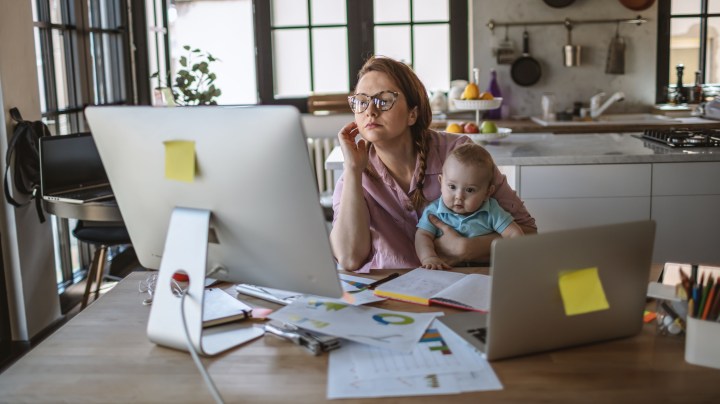 COPY
In an article for Time, Anne Helen Petersen argues that many corporations miss the mark when they try to show empathy to employees during the pandemic. South_agency via Getty Images
Workplace Culture

In an article for Time, Anne Helen Petersen argues that many corporations miss the mark when they try to show empathy to employees during the pandemic. South_agency via Getty Images
Listen Now

Over the past year and a half, the pandemic has turned people’s personal and professional lives upside down. In response, some companies decided to embrace the idea of empathy toward their employees, creating what writer Anne Helen Petersen called the corporate empathy trap in an article for Time.

“Marketplace” host Kai Ryssdal spoke with Petersen, who writes the newsletter Culture Study at Substack, about the workplace trend. The following is an edited transcript of their conversation.

Kai Ryssdal: I need you to start, I guess, with the basics. What does it mean for a company to be empathetic, and should a company even be doing that?

Anne Helen Petersen: So, theoretically, a company that is empathetic is listening to and understanding its employees’ needs in a 360 way, so that means their needs outside of the workplace. So, if they have obligations or distractions or difficulties, there is an understanding of why that is happening and why the worker might need different accommodations.

Ryssdal: Which is all great. And I’m going to come off as a jerk here, but if I’m running the Acme Widget Co., my job is to make and sell widgets and make money and keeping my employees safe and well-trained. All of that is my job. But dealing with the rest of it maybe isn’t. I don’t know.

Petersen: Yeah, for sure. I mean, part of the difficulty here is that this really came out of the last year and a half of companies trying to figure out how to keep morale up in the face of what’s happening with COVID. And an overarching strategy, which really feels like [a human resources] buzzword initiative, is that we are going to try to be empathetic. And I think it’s more, “Wow, we’re having some attrition problem, and company culture is really bad. So how can we adopt a strategy that makes it seem like we are trying to figure out how to be this way towards our employees?”

Ryssdal: Yeah, and the catch with this coming in HR-speak, as it were — and please, HR professionals, do not “at” me on this one — HR works for the company.

Petersen: Yes. And I think that the way that a lot of these initiatives, whether it’s “empathy in the workplace,” which is a very popular one right now, another one is “bringing your whole self to work,” is they come —

Ryssdal: Explain that a little bit, though, the “whole self” thing, because that’s really relevant here.

Petersen: Yeah. So that bringing your whole self to work is that understanding that like, you are a person who has an identity and who has responsibilities outside of whatever your task is in the workplace. And so that means if you are a Black person, you are showing up with all of the burdens and difficulties and racism that accompanies being a Black person in the United States when you show up to work. Now, again, the difficulty is companies want to model this attitude but aren’t necessarily prepared or willing to deal with slight decreases in productivity.

Ryssdal: How would I know if my company is trying to be empathetic toward me?

Petersen: Well, usually, you know, because there is an email or a Slack message that’s like, “We are modeling empathy in the workplace.” Sometimes, workers told me that they found out that their employer was trying to be empathetic in the workplace because the CEO gave an interview. There’s just this overarching disconnect that makes a lot of employees, at least that I’ve spoken with, they’re like, “This is all bs.”

Ryssdal: So, after having reported this piece and written it, what’s your takeaway? I mean, is it working? Is it worth it, you know?

Petersen: So, here’s what I hear again and again. The best way to show that you are actually empathetic is to create policies that make it easier for people to have lives: back-to-the-office plans that don’t require all workers to be in the office at an arbitrary time, plans that don’t have any room to acknowledge that people are mothers or caretakers or have disabilities that make it difficult. I think that what we come back to again and again is that a lot of this messaging that I think people are learning or are receiving is, “I feel broken, you feel broken. I’m empathetic about you feeling broken, but also could you please do your job?” I don’t know if that makes anyone feel better.