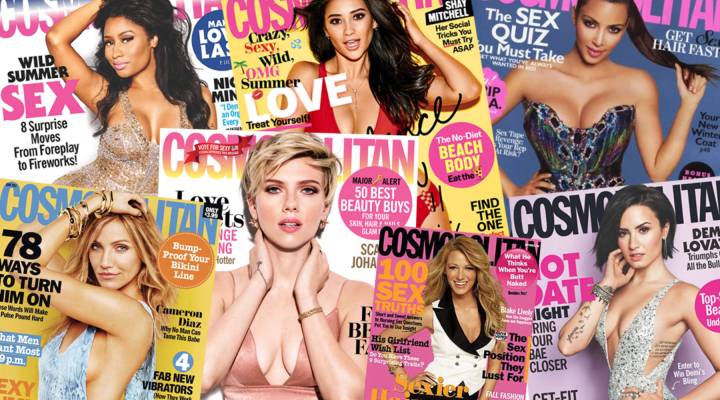 COPY
Cosmopolitan is one of the most widely read women's magazines in the world. Sarah Menendez
Shelf Life

Cosmopolitan is one of the most widely read women's magazines in the world. Sarah Menendez
Listen Now

It’s a very long way from the Ozark mountains of Arkansas to the top ranks of the publishing world in Manhattan. But it’s a distance Helen Gurley Brown made, although not without some bumps along the way. She eventually became a best selling author, a feminist icon, and a very successful business woman.

Brown is the subject of a new biography by Gerri Hirshey called “Not Pretty Enough: The Unlikely Triumph of Helen Gurley Brown.” Marketplace host Kai Ryssdal talked with Hirshey about her new biography. An excerpt of the book can be found here.

On Brown taking over Cosmo:

It was dead in the water. In fact they were sending back 140,000 copies a month. Now Helen, she ran smack into a really interesting demographic in the ’60s. There was an 80 percent rise in single households, mostly in cities, and she was right in the pocket with this magazine. At that time [she] had no competition, and she was the only one speaking forthrightly about sex, reproductive rights, and that sort of thing…In about three years she had gotten it from about moldering in the 600,000 to close to a million and a half [in circulation] and the ads just exploded. When she took over the ads were at about the same rate of pages as they were in the 1880s.

On dealing with sexism at Cosmo:

She saved Cosmo, and yet, in 1972, so seven years into it for her, one of the executives said ‘Helen your sell-through is fabulous, we love you. But I have to tell you, you can’t come to the big Hearst anniversary party because women aren’t allowed.’ It was that way. They gave her trinkets, you know a Mercedes and this and that. But they never paid her what she was worth, they would not let her have a viable travel budget, so she was kept on  a very short leash.

I wouldn’t say the company has forgotten about her. But in the big full page ad in the Times announcing Cosmo’s incredible world domination now; 68 million readers in digital and paper, 64 editions at that time,  100 countries, 37 languages, Helen was not mentioned once. So there has not been any great reverence in remembering what she did.

Explore a timeline of how Cosmo has changed over the years.