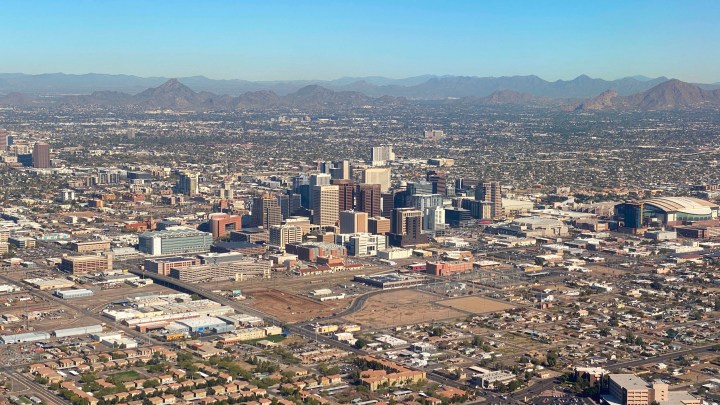 COPY
Phoenix grew at a faster rate in the last decade than any other major metropolitan city in the U.S., new census data shows. Daniel Slim/AFP via Getty Images

Phoenix grew at a faster rate in the last decade than any other major metropolitan city in the U.S., new census data shows. Daniel Slim/AFP via Getty Images
Listen Now

The vast majority of Americans live in cities and their broader metro areas, according to new data released this week from the U.S. Census Bureau.

The population of U.S. metro areas grew by 9% over the last decade. And about 86% of Americans live in urban or suburban areas, or at least did when census workers were gathering data early in the pandemic.

To see why these numbers matter, especially for rural communities, look no further than the infrastructure bill. Members of Congress will likely look to census data to determine where money should go.

“We’re seeing a huge infrastructure package right now in our federal government for building roads and having influxes of resources for community economic development, not the least of which is broadband,” said Jane Kolodinsky, who runs the Center for Rural Studies at the University of Vermont. “And so when you have declining rural populations by which the influx of resources depend on the populations levels, we will see a change in the amount of resource that reaches rural areas.”

At the same time, this particular batch of numbers came just as people were moving all over.

“I take it with a grain of salt, because we did see these huge shifts in migration patterns following the onset of the pandemic,” said Peter Haslag of Vanderbilt University.

Those moves may not show up in this census, but they are showing up in other measures, according to Robert Dietz with the National Association of Home Builders.

“Just as we have seen in the construction data some increases in, you know, those outer suburb homebuilding projects, we have seen additional growth over the last year in those rural markets,” he said.

The 2020 census does capture longer-term demographic shifts, Dietz said, but in terms of where Americans are living now, we probably need a bit more data.