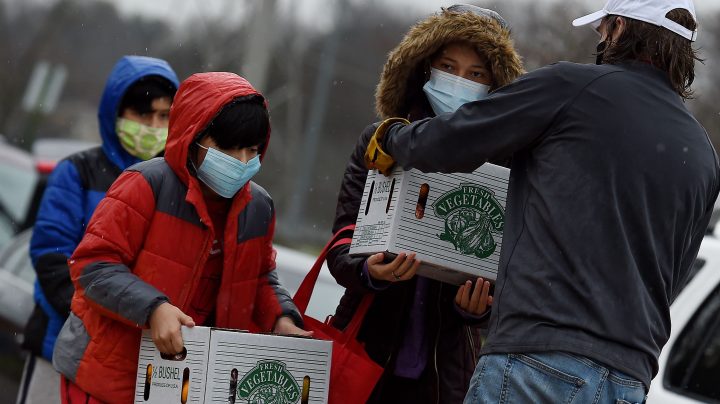 COVID-19 has shed light on the links between public health and the economy. But the role of public health — and investment in public health infrastructure — extends far beyond infection control and prevention.

“I think there is a real opportunity to let people know about how whatever issue they care about directly relates to public health,” said emergency room physician and former Baltimore Health Commissioner Dr. Leana Wen. “If somebody cares about public safety, or the economy, or education, there is a direct link to the work of health departments.”

Those links are part of what Dr. Wen explores her new memoir, “Lifelines: A Doctor’s Journey in the Fight for Public Health.” Click the audio player to hear Wen’s conversation with “Marketplace” host Reema Khrais. The following is an excerpt from the book.

The first sign of something wrong was the sound of a high-pitched squeak.

“What’s that?” Christine whispered. I had just opened the door of the apartment complex my family shared with hers and two others. We looked at each other as the noises continued. It was a wet rattle and wheeze.

Then we heard someone shouting in rapid-fire Spanish. I grabbed Christine’s hand, and we ran toward the noise.

It was the apartment next to Christine’s. The door was open and we saw that the noise was coming from Tony. He was in the third grade, two behind me and Christine. Tony was sitting upright, straight as a board, clutching the sides of a rocking chair. His cheeks were streaked with red. His breathing was short and shallow. Each exhale ended in a wheeze and a squeak, each shorter than the one before.

His eyes were wide and beads of sweat ran down his face. He looked terrified.

I knew that feeling well. Asthma.

Tony’s grandmother was yelling and begging us to help. There was an inhaler on the floor. I grabbed it and held up it up to Tony’s mouth. I pressed it, but nothing happened.

I got my own inhaler out of my backpack and pulled his lips open. I pressed twice. I took it out and tried again.

The medication dribbled out of his mouth. His eyes were starting to close. His breathing was slowing and I could barely hear the wheezing. His lips were turning purple and blue.

Christine’s mother had heard the noise. She held the phone in her hand. “We need to call 911!”

I was holding Tony up, and he felt heavy in my arms. His grandmother shook him and begged him to wake up. She thumped him on his back. She grabbed him by his hair.

Christine’s mother had been a nurse back in her home country. She lifted Tony and laid him flat on the floor. She pressed on his chest and breathed into his mouth.

Eventually, she stepped back and shook her head. The grandmother began to wail.

We listened to her scream and cry all night.

“Do you think Tony would have lived if we’d brought him to a hospital?” I whispered to my mother as we lay in bed. In Shanghai, where I was born, I’d had such severe asthma that I ended up in the hospital nearly every month. It was terrifying to fight for air, but I always knew that once I got to the hospital, the doctors would make me better.

“Maybe he was so sick that nobody could have helped him,” my mother said.

“Who knows who else would come? Maybe the police. They could all be deported and sent back to Mexico.”

“So if something happens to you, I shouldn’t call 911 because you’ll be sent back to China? What about Father — what if his ulcer bleeds and he’s very sick?”

“Think about what happened to your father in China. Going back is not better than death.”

“But that’s not right,” I remember saying. “How come other people can call the ambulance and go to the doctor? Why is it different for us?” My mother’s answer fixed my future. “Life is like this for some people. Maybe one day you can change things for people like Tony and your father.”

That night cemented my decision to become a doctor so that when I encountered another Tony, his life would not have to end in a preventable death.

Public health is housing. It’s food. It’s clean air. It’s education. It’s the ability to level the unequal playing field. It’s the social supports that give everyone their best chance to survive.

Fifteen years later, I did meet another Tony. He, too, was a third-grader with severe asthma. I got to know him because he and his mother would come to the emergency department every week, sometimes multiple times. He always had the same symptoms: wheezing, coughing, and gasping for breath. When it was particularly bad, he’d get that familiar frightened look in his eyes, the look of not knowing whether the next breath would come.

Each time, I had every medical tool at my disposal. I’d put a mask on him to administer oxygen and nebulizers. I’d give him steroid medications. I’d monitor his breathing. Most of the time, he’d get better within a couple of hours and go back home.

But he kept on returning, week after week. He and his mother were homeless. They shuttled between shelters and the homes of different relatives and friends. His clothes always reeked of cigarettes because his mother’s boyfriend and her family smoked. At some point, they moved into a home of their own, but his asthma didn’t improve — they were in a row house where all the units were vacant and harbored mold and other allergens. Two blocks away, an incinerator pumped out toxins.

This Tony was being treated at one of the best hospitals in America. Every time he got sick, we’d make him better. But medicine could not treat the poor air quality he breathed. Medicine could not change the poverty, instability, stress, and powerlessness of his and his mother’s lives. This Tony, too, was a testament to the notion that the currency of inequality is years of life.

This is a reality I knew all too well from my childhood. My family and I came to the United States from China with less than $40 to our name. We lived paycheck-to-paycheck and worried every month about making the rent. Inequality left a mark on everyone I knew: my classmates, who became victims of gun violence; their families, who were decimated by drug addiction; our neighbors, who died young from preventable diseases. I became a doctor to save Tony. I chose emergency medicine so that I could treat everyone and turn no one away, not immigrants afraid of deportation or people who couldn’t pay. But working in the ER was also where I saw the limitations of health care. I could resuscitate a young man dying from gunshot wounds, but what could I do about the violence on the street, violence so consuming that elementary schools didn’t have recess outdoors? I could stitch up a child’s laceration, but what could I do about the ache in her belly because the last meal she ate was her school lunch two days before? I could prescribe drugs for diabetes and heart disease, but how could I recommend healthy eating knowing that the corner store my patient depended on for food sold no fruits or vegetables?

It wasn’t just health care that my patients needed: it was public health. Public health is housing. It’s food. It’s clean air. It’s education. It’s the ability to level the unequal playing field. It’s the social supports that give everyone their best chance to survive. For so many people — indeed, for all of us — public health is our lifeline.

Excerpted from Lifelines: A Doctor’s Journey in the Fight for Public Health by Leana Wen. Published by Metropolitan Books, an imprint from Henry Holt and Company. Copyright © 2021 by Leana Wen. All rights reserved.

Correction (Aug. 16, 2021): A previous version of this story misstated Leana Wen’s status as an emergency room physician. The text has been updated.