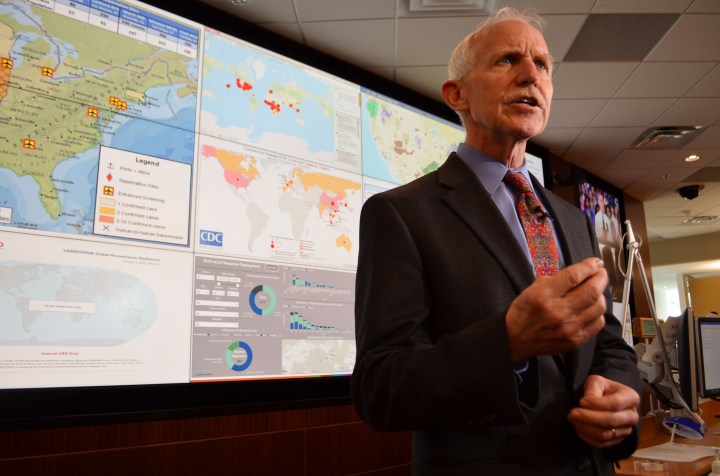 COPY
Dr. Jay Butler, deputy director for infectious diseases at the Centers for Disease Control and Prevention, stands in the agency’s Emergency Operations Center in Atlanta. This has been the “nerve center” of the CDC’s response to the COVID-19 outbreak since January. Sam Whitehead/WABE
COVID-19

Dr. Jay Butler, deputy director for infectious diseases at the Centers for Disease Control and Prevention, stands in the agency’s Emergency Operations Center in Atlanta. This has been the “nerve center” of the CDC’s response to the COVID-19 outbreak since January. Sam Whitehead/WABE
Listen Now

When a public health crisis strikes, the Centers for Disease Control and Prevention staffs up its Emergency Operations Center.

Since January, the facility in Atlanta has been the control center of much of the agency’s response to the outbreak of COVID-19, the respiratory disease caused by the new coronavirus.

On the main floor, public health workers sit side by side in long rows: some focus on their computer screens, others take incoming phone calls, others huddle together to confer over data.

Officials gather in side conference rooms for strategy sessions. Giant monitors display charts and maps with up-to-date information on the COVID-19 outbreak. For such a busy place, it’s kind of quiet.

“It can be deceptively quiet sometimes,” said Dr. Jay Butler, deputy director for infectious diseases at the CDC.

He recently led a press tour of the facility, which he likes to think of as an emergency room where critical problems get triaged instead of patients.

“Maybe we can consider this the ER of public health,” Butler said. “Even though at any given moment it may be quiet, there’s times when it’s quite hectic.”

The EOC is always staffed around the clock, but activity picks up during events like the COVID-19 outbreak. The CDC says it has about 1,000 people working on the response globally. Some have been pulled off their regular jobs to pitch in.

Butler says different parts of the agency started watching the disease after it emerged in China late last year. There’s a team tracking cases, one developing and running diagnostic tests, another looking at the best treatments. Eventually, the CDC decided to bring those groups together.

“Of course, this is government, so there’s a structure to what we do here,” Butler said. “Although our goal is to get outside of our bureaucratic silos and be able to communicate.”

According to Butler, the idea is to help people make quick decisions about deploying resources.

The CDC’s budget for Public Health Preparedness and Response for the current fiscal year is $850 million. The agency also has $85 million dollars in an infectious disease rapid response fund.

But Butler and others with the CDC declined to say how much it costs to run the EOC or how much the agency has invested in the COVID-19 response.

“We try to be good stewards with the public funding,” Butler said. “But also [recognize] that money should not be the issue, primarily, when we’re talking about the health of Americans.”

On Wednesday, President Trump appointed Vice President Mike Pence to coordinate the U.S. response to the disease. He also said he’d be open to spending “whatever’s appropriate” to combat it. Earlier, his administration had asked Congress for $2.5 billion to fund the response. Democrats say the administration should be seeking more like $8.5 billion.

A big part of the government’s response is carried out at the local level by state and county health departments. Dr. Marcus Plesica, chief medical officer with the Association of State and Territorial Health Officials, has spent the last few weeks working in the EOC.

“I’m there for maybe half a day in the morning,” he said.

Plescia helps the CDC coordinate with local public health departments, which he says  want to make sure they’re following the agency’s recommendations.

“Often it’s a request,” Plescia explained. “‘Hey, we need some formal guidance on this, can you help us out? Can you give us something that we know is science-based and we know that’s going to be used uniformly across many different communities?’”

Plescia points out this is a new disease. Public health officials at all levels of government are still learning about it. Already, there is some disinformation about COVID-19, and the EOC braintrust relies on partners outside the CDC to help dispel it, like the American Public Health Association.

He says those kinds of rumors can make an outbreak worse.

That’s why his organization routinely amplifies CDC recommendations through social media and its public health members to make sure the best information gets out to the public.

“You only really get a few times to make sure that they’re getting the right information,” Benjamin said. “Getting that information out there correctly as quickly as possible is very very important.”

This week, that messaging from U.S. public health officials has been about how Americans should prepare for COVID-19 to spread widely through their communities. Some say such an event could significantly disrupt daily life. 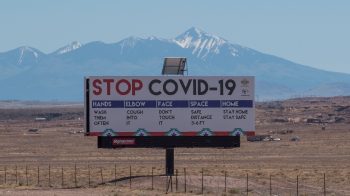