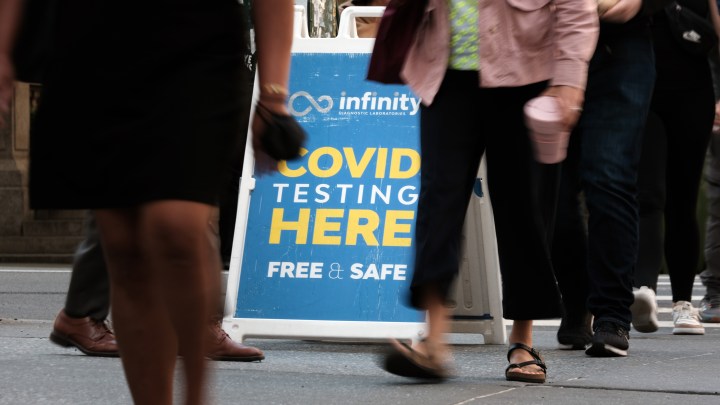 COPY
COVID tests and vaccines are free of charge as a result of the public health emergency declaration in 2020. Spencer Platt/Getty Images
COVID-19

COVID tests and vaccines are free of charge as a result of the public health emergency declaration in 2020. Spencer Platt/Getty Images
Listen Now

It may not feel like it anymore, but we are still in an official public health emergency created by COVID-19 — and have been since the federal government declared it in late January 2020.

As of now, the emergency declaration only runs through mid-July. Groups representing health care providers want that deadline extended. On Tuesday, we learned it will be.

​The Joe Biden administration has promised to give states 60 days’ notice before ending the public health emergency, and that deadline has now come and gone.

To some extent, the fact that we’re still officially in a state of emergency is about sending a message.

“There’s a certain amount of symbolism attached to the declaration of a public health emergency, as sort of a signal to the public that things are still bad,” said Larry Levitt, executive vice president for health policy at the Kaiser Family Foundation. “But there are also huge implications for the health care system and government spending.”

For one, vaccines and testing are free because of the emergency. Many COVID tests and vaccines for kids are available only during the emergency because they haven’t been fully approved by the Food and Drug Administration.

Plus, as long as it’s in place, states can’t drop people from Medicaid, which provides low-income people with access to health services.

“The results of this have been huge,” Levitt said. “We estimate that by the end of this fiscal year, 22 million more people will be in the Medicaid program.”

“There’s some really important benefits that I have enjoyed as a provider because it’s been convenient for patients, including telehealth services,” said Dr. Kavita Patel, a primary care doctor in Washington, D.C.

The public health emergency has temporarily loosened a lot of rules that restricted access to telehealth, she said.

“So we have been able to expand telehealth services, being able to give care by video or phone in any geographic area. And that’s not something we normally were able to do.”

Patel added that many people don’t realize it’s something they might not be able to keep doing once the public health emergency ends.