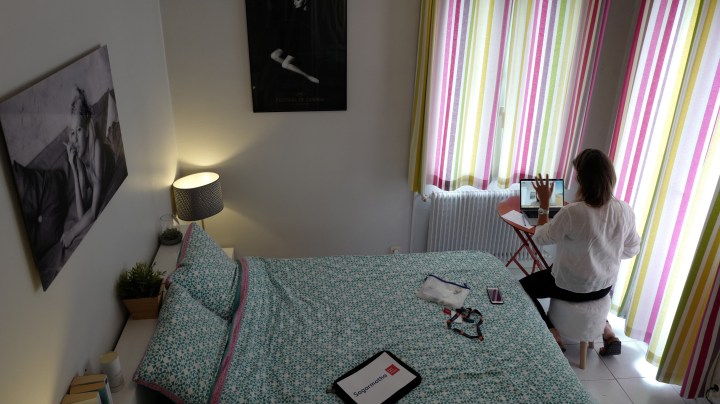 COPY
Research shows that managers are more likely to recognize the achievements of in-person workers rather than work-from-home employees. This could disadvantage parents and caretakers. Valery Hache/AFP via Getty Images
COVID-19

Research shows that managers are more likely to recognize the achievements of in-person workers rather than work-from-home employees. This could disadvantage parents and caretakers. Valery Hache/AFP via Getty Images
Listen Now

There’s a bit of a disconnect happening in corporate America right now. Early and mid-career workers have enjoyed skipping out on stressful commutes, stiff suits and overpriced lunch salads.

But what about their bosses?

“Managers do not really share the view of many workers,” said Wen Fan, a professor of sociology at Boston College who has been studying remote work during the pandemic. “They still think that as a worker, you need to work in the office. So remote work is something incompatible with their image of what a worker is like.”

For many, the image of what a worker is like is still someone who comes in early and stays late, tapping away at their keyboard under their boss’s watch. This is already causing some stress for people who have been working from home during the pandemic.

FOLO, fear of losing out

This FOLO, or fear of losing out, might be justified. In a study published in 2013, Stanford University economics professor Nicholas Bloom tracked two groups of travel agency employees, remote and in person.

“And after 21 months, the folks that were randomly chosen to work from home had half the promotion rates of those that came in. So that is a massive gap,” he said.

This was despite the fact that the remote workers were 13% more productive than those coming into the office.

“From talking to manager after manager, they all say the same thing, which is, ‘Look, if you’re coming in every day, I see you around, I get to know you, I think of you. You may even volunteer yourself for a promotion, and you’re obviously going to outcompete somebody else that’s working from home say four, five days a week,” Bloom said.

Climbing the career ladder? Best to work in person

Spontaneous encounters at the office matter, including those working lunches, happy hours and even awkward elevator rides. Bloom said those concerned about climbing the career ladder should try to work in person, at least part time — especially if other members of their team are going in — or find a job where everyone is remote.

But what if that’s not an option for parents and caretakers and others who may need to prioritize remote work over the alternative? The burden of the inequities that come with working from home shouldn’t fall on employees, but on managers, said Sara Prince, who leads diversity, equity and inclusion at the consulting firm McKinsey & Co.

“Anybody who leads a team really has to lean into this moment: What does it mean to be an effective leader in an environment where how we work is really transforming itself?” she said.

Prince is particularly concerned about young workers who need to engage with more experienced ones to advance. “And when you think about mentorship, sponsorship, a lot of that is fostered by us finding a personal connection in another human being, where we see ourselves in them,” she said.

And in the big picture, she said this work-from-home conundrum is about much more than the careers of a few people.

“There is a real risk that people with diverse backgrounds and identities will be left behind,” Prince said.