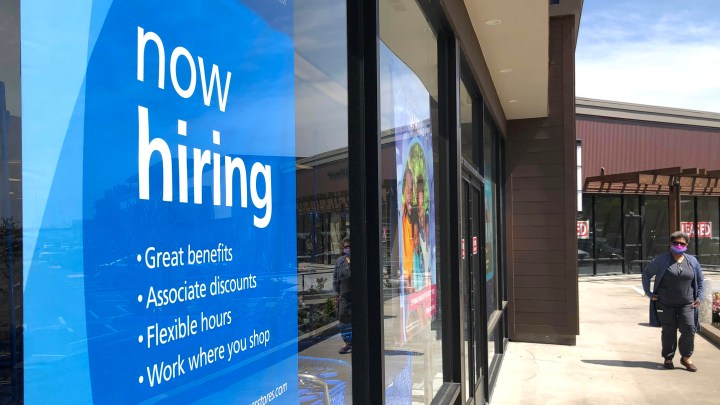 COPY
Despite a dip in unemployment claims, 13 million Americans are receiving some form of benefits for being out of work. Justin Sullivan via Getty Images
COVID & Unemployment

Despite a dip in unemployment claims, 13 million Americans are receiving some form of benefits for being out of work. Justin Sullivan via Getty Images
Listen Now

But even though both numbers are trending down, they’re still high.

Nearly 13 million Americans are getting some kind of unemployment benefits — most of them through one of the pandemic-related federal programs.

That’s after about 20 states pulled out of those federal programs early to try to get more people to go back to work.

It’s been over a month since many states ended their participation. And so far, there’s no evidence that cutting off those benefits has led more people to get jobs.

The firm found that employment actually fell about 1% in states that ended the federal benefits and rose more than 2% in states that kept them. UKG, another payroll-processing firm, found something similar.

“States that didn’t end the benefit ended up growing their workforce activity about twice as fast as the states that did,” said UKG’s Dave Gilbertson, adding that correlation is not necessarily causation here.

Many of the states that are still participating in the federal programs were hit the hardest by the pandemic recession, so they had a lot further to go in terms of hiring.

Even so, “it was very clear in the data that … the expanded federal benefits were not the reason people weren’t returning to work,” Gilbertson said.

One of the main reasons many people are still out of work is child care, said Rebecca Dixon, at the National Employment Law Project.

“Lots of camps are still closed. There’s the issue of, are schools going to reopen in person?” she said.

There’s also the spread of the delta variant and the fact that, in many states, COVID cases are rising again. Meanwhile, the expanded federal unemployment payments are set to expire everywhere in a month.

“It’s certainly going to complicate people’s financial stability, their housing stability, and we know that it will slow economic growth,” he said.

That’s because, Stettner said, the expiration will take a lot of consumer spending out of the economy.