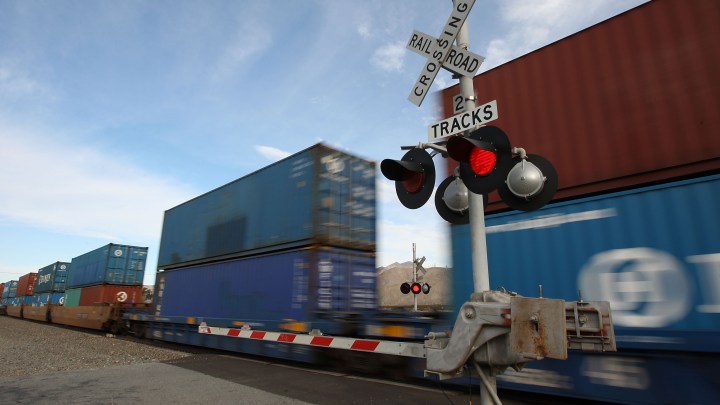 COPY
The U.S. has seen an uptick in intermodal train traffic over the first half of the year — that's when products travel in containers from ship to truck or train. David McNew/Getty Images

The U.S. has seen an uptick in intermodal train traffic over the first half of the year — that's when products travel in containers from ship to truck or train. David McNew/Getty Images
Listen Now

Warren Buffett was once asked which economic indicator he would choose if he were stranded on a desert island with access to only one set of economic statistics. There are lots of indicators out there — consumer confidence, inflation and unemployment.

But Buffett picked freight rail traffic. And for good reason.

“What we move is the economy. It’s the tangible economy,” said Ian Jefferies, CEO of the Association of American Railroads. “And so as the economy goes, rail goes. So when rail is doing well, it usually means the economy is running pretty strong.”

Right now rail is doing well, especially when it comes to intermodal train traffic, Jeffries said. That’s when products travel in containers from ship to truck or train.

“The highest volumes we’ve ever seen”

“For the first half of 2021 … intermodal traffic was the highest volumes we’ve ever seen,” he said.

Intermodal train traffic was up more than 17% from the first half of last year, Jeffries said. No surprise there, because train shipments fell off when the pandemic started, like the rest of the economy. But intermodal traffic was also more than 5% higher than in 2019, which was a good year. These intermodal trains are brimming with the imported products consumers are demanding.

“This is a good sign,” said Diana Furchtgott-Roth, a former deputy at the Transportation Department now teaching at George Washington University. “It’s a good sign first of all that people have money to spend. And second, it’s good that they have confidence to spend.”

Jammed ports can cause problems on the rails

U.S. ports are backed up with a traffic jam of ships full of imports. Because of that whole intermodal thing, problems at the ports can cause problems on the rails. Plus, shipments for the holidays are starting now.

It could take longer for imported products to reach store shelves, Furchtgott-Roth said.

“If we don’t have enough goods shipped by rail, if the congestion continues, the prices will be higher,” she said.

Freight rail also tells us about U.S. exports. Right now, rail shipments of grain are down. That’s kind of weird, since farmers are producing plenty, said Joseph Schofer, who teaches civil and environmental engineering at Northwestern University. Grain might also be caught up in the international shipping snag, he said, or maybe it’s a storage issue.

“If you don’t have enough storage, you can’t move product and the system slows down or freezes up,” he said.

Ore, metal and chemical shipments are up

Rail shipments of other raw materials like ores, metals and chemicals are up, Schofer said; they’re going to U.S. factories, which are ordering a lot of supplies right now.

Either way, Schofer said, it’s a vote of confidence in the economy, pointing the way to more economic growth this fall. How much growth depends on COVID-19, of course, but also how long it takes to unclog the ports and sort out storage issues and other bottlenecks that could cut into the rail shipments the economy needs to keep humming.