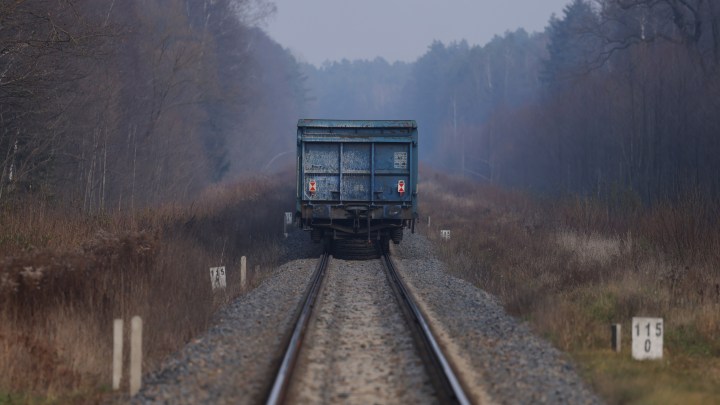 COPY
Some goods with high price margins, like computers and car parts, typically travel between China and Europe by rail. Above, a freight train rolls through a forest in Poland. Sean Gallup/Getty Images

Some goods with high price margins, like computers and car parts, typically travel between China and Europe by rail. Above, a freight train rolls through a forest in Poland. Sean Gallup/Getty Images
Listen Now

There have been a lot of disruptions in global shipping over the last couple of years. There was the great boat watch of 2021 when that container ship got stuck in the Suez Canal. And there was a surge in demand for goods in general, which clogged ports and sent shipping prices from China to Europe through the roof.

“So, ocean freight — typically pre-COVID — maybe you paid 1,500 [euros per container],” said Jan Fransoo, a professor of operations management at Tilburg University in the Netherlands. “And then in this panic last year, this could go over 10,000 [euros] in some cases,”

Because of this, companies wanted to become less dependent on waterways and find a cheaper alternative. And what’s an alternative to sea? Land.

“What we’ve actually seen is that the share of rail has really increased quite a bit,” Fransoo said.

Most of these rail routes go right through Russia, where train freight increased 40% last year. And as the price of shipping by sea has gone up, shipping by train has become more affordable. It’s also fast; Fransoo said a journey from China to Europe that takes 40 days by ship may take as little as 15 by train.

Only 2% of goods shipped between Asia and Europe go by rail. But it’s stuff like car parts and computers — high-margin goods. Now, many corporations and logistics companies have stopped using the popular rail network that moves through Russia to get goods from China to Europe.

“By choice, a lot of customers we’ve seen now move away from the rail,” said Ian Cullingham, vice president of sales at AIT Worldwide Logistics, a transportation management company. “In fact, some have even said they don’t want to move rail for the foreseen future.”

Shipping by air isn’t an ideal alternative. For starters, it’s much more expensive. And because of the war, planes are taking longer routes to avoid Russian and Ukrainian airspace. This means planes can’t turn around as fast and have to carry more fuel for their longer trips, which leaves them less space for cargo. Prices are in constant flux.

“We’d love to get back into that position where we can just at least go back to the customer and say, ‘OK, we can get you a rate for three months, it’s not going to change.’ But the way the market is currently, we just can’t do that,” Cullingham said.

The strain created by the war is increasing demand for shipping through whatever land, air and sea routes are left. And this will affect how much goods cost, and not just in Europe.

“We live in a connected world, so prices and costs in one part of the world, as they really rise dramatically, they affect everybody, whether we like it or not,” said Willy Shih, a professor of management practice at Harvard University.

If shipping prices between Asia and Europe climb, he said cargo companies will also raise the cost of shipping to the United States. Meanwhile, the manufacturers that make these goods are not going to only increase prices for European consumers — they’ll spread the pain out evenly across the world.