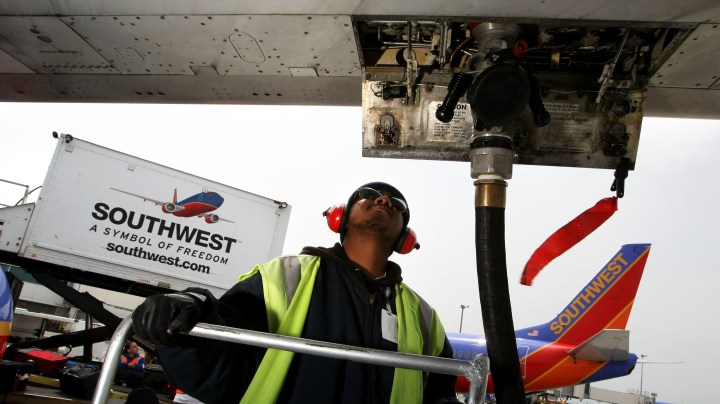 COPY
A worker monitors a fueling hose as he pumps fuel into a plane in 2008 at Oakland International Airport in Oakland, California. Justin Sullivan via Getty Images

A worker monitors a fueling hose as he pumps fuel into a plane in 2008 at Oakland International Airport in Oakland, California. Justin Sullivan via Getty Images
Listen Now

As we enter the last few weeks of the summer travel season, even with the delta variant and rising case numbers, people are still flying a lot more than they were last year.

That means there’s a higher demand for jet fuel. And that’s turning out to be a problem — especially for smaller airports.

There’s a jet fuel shortage, and American Airlines, among others, is warning that it could turn into an emergency.

About 18% of flights were delayed or canceled on a recent Sunday due to slow fuel deliveries, said Brian Sprenger, the director of Bozeman Yellowstone International Airport in Montana.

That isn’t such a big deal; he said more flights have been impacted by thunderstorms.

“But thunderstorms are something that people expect. And fuel supply is something that’s, you know, more unexpected by people,” Sprenger said.

He added that Bozeman’s airport has also been dealing with a spike in traffic.

“We’ve had a near doubling in aircraft here at the airport compared to 2019. A lot more flights, a lot more people traveling. And that’s certainly a spiked demand for fuel,” Sprenger said.

Plus, firefighting aircraft are flying out of other airports in Montana and competing for the same limited fuel supply.

But there’s another problem: “There’s not a shortage of fuel. There’s a shortage of the infrastructure to get that fuel to where it needs to go,” said Patrick De Haan, a petroleum analyst at GasBuddy.

The infrastructure he’s talking about is truck drivers capable of driving tankers full of fuel to airports. The Biden administration is looking into making it easier to become a truck driver, but “this is probably not going to be measured as a complete recovery in months but probably more so in years,” De Haan said.

If the delta variant is contained by the spring, he said, we could see the exact same shortage next summer.