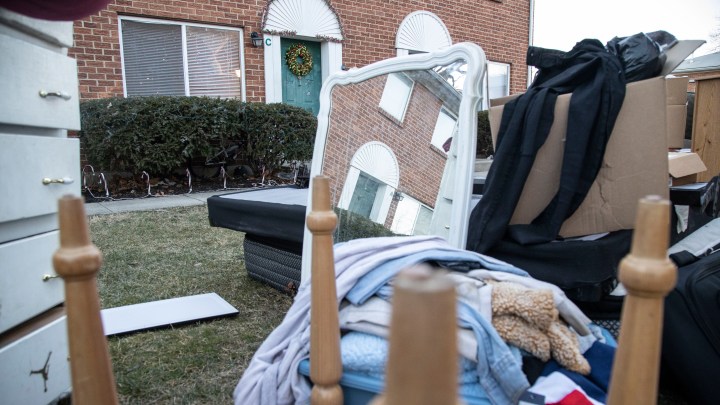 COPY
While foreclosure rates are currently low, nearly 5% of homeowners have “seriously delinquent” unpaid mortgages. Above, the belongings of a person being evicted sit on the lawn in front of their Columbus, Ohio, home in March. Stephen Zenner via Getty Images

While foreclosure rates are currently low, nearly 5% of homeowners have “seriously delinquent” unpaid mortgages. Above, the belongings of a person being evicted sit on the lawn in front of their Columbus, Ohio, home in March. Stephen Zenner via Getty Images
Listen Now

A quick look at foreclosures rates might make us think that things are pretty good out there for homeowners. Foreclosures are at all-time lows, but that’s in part because of the Centers for Disease Control and Prevention moratorium that extends to the end of this month.

There’s another number out there that’s potentially troubling, though.

The percentage of homeowners who are 90 days or more behind on paying their mortgage is more than double what it was last year in the first quarter of 2020.

Those unpaid mortgages are called “seriously delinquent,” and at last count, nearly 5% of all home mortgages in the U.S. were in that category.

“It’s elevated for sure,” said Susan Wachter, who studies real estate at the University of Pennsylvania’s Wharton School. She said that’s not all that unexpected, given the pandemic.

“For those who are unemployed, this is a serious problem,” Wachter said. “Without a job, it is very difficult to pay off that mortgage.”

But homeowners who can’t pay are not having to foreclose, thanks to the grace period of the moratorium.

And there’s reason that this economic moment is different from the Great Recession, according to Guy Cecala of Inside Mortgage Finance.

“Virtually all the loans outstanding now, the ones we’re talking about facing distress or problems, are good mortgages,” he said, meaning they’re not subprime loans or poorly underwritten.

Back then, home prices tanked and banks needed to offload mortgages quickly.

But this housing market is different. Home prices are up, said Gary Painter at the University of Southern California, and people still want to buy. So he said it doesn’t make sense for banks to walk away.

“They’re much better off now thinking about options that keep people paying if they have the ability to pay going forward,” Painter said, like letting homeowners extend their mortgage. For example, if a homeowner misses nine months of payments, the bank can tack on an extra nine months at the back end.

Painter still expects some foreclosures, though.

“But I don’t think you’re going to see a wave of foreclosures like we saw in the Great Recession,” he said.

And that’s good for homeowners and banks.