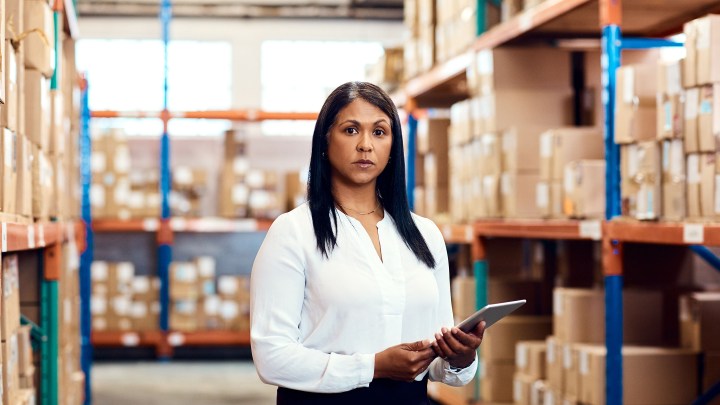 COPY
Following the civil rights movement of the 1960s, special programs emerged that were meant to connect large corporations with more diverse suppliers. kupicoo via Getty Images
Back to Business

There’s been some renewed discussion around increasing diversity in spaces beyond just the common office, like in company boardrooms, among recruiters and even within corporate incentive structures.

But there’s another part of the private sector that might be left behind in all these discussions — supplier diversity.

Unfortunately, diversity among suppliers within corporate America is still low and seemingly not getting the support from either the private or public sector, according to Kelly Burton, executive director of Black Innovation Alliance and founder of the Nexus Research Group consulting firm.

“While the vast majority of corporations and government agencies rely on supplier diversity to source diverse vendors, the model doesn’t work well at all,” Burton said in an interview with “Marketplace Morning Report” host David Brancaccio.

Below is an edited transcript of their discussion about how low supplier diversity is, why current programs and models intended to increase supplier diversity are not working and what could be done to fix a problem that’s overlooked.

David Brancaccio: Where does the company you deal with get its stuff? That’s a key question. And in the quest to confront systemic racism in this country, there’s a new focus on what is called supply chain diversity. Dr. Burton, can you give me a better sense of what that means? It’s about where the company you’re dealing with gets its stuff, right?

Kelly Burton: So supplier diversity programs are the primary means by which corporations and government agencies source diverse companies to do business with. It’s a model that was created during the Nixon administration in the aftermath of the civil rights movement to address racial discrimination in procurement and has since been opened up to include women, LGBTQ, veterans, disabled and even small businesses. So within the diversity, supplier diversity model, these are all considered disadvantaged groups.

Brancaccio: And I’d like to say, “And it’s perfect in every way, and the problem was solved.” And you’re going to tell me, “No.”

Burton: If only, if only. While the vast majority of corporations and government agencies rely on supplier diversity to source diverse vendors, the model doesn’t work well at all. On average, just about 10% of corporate spending is done with disadvantaged groups, which means the amount of spending done with businesses led and owned by people of color tends to hover in the single digits. So for corporate America, it’s less than 5%, and for government contracting, it’s around 2%, which is abysmal when we consider the fact that people of color make up 39% of the U.S. population.

Brancaccio: Yeah, and from your research, in your interactions, do you find that the companies doing the buying have their heart in this?

Burton: That’s a hard one. What we know is, generally speaking, these programs are neither well resourced nor well supported. Supplier diversity professionals find it challenging to secure cross-organizational buy-in from managers and senior-level executives. According to one study, 54% of corporations dedicate one staff or less to supplier diversity. So it’s hard to say that you support something when you can’t even dedicate a full-time body to it.

Brancaccio: And this is where leadership could come in, right? If the boss, if the CEO and the CEO’s deputies are making this a priority, things magically start to change.

Burton: Indeed, and we need more corporate leaders to step up and call for reform. But the challenge is that corporate America is very much invested in this system. It’s been the way things have been done for over 50 years. And even though it’s quite broken, it’s very difficult for corporate America to change.

Brancaccio: If a person wants to be a supplier in this complicated system, often they need the credentials, right? And that system can itself be a barrier?

Burton: Absolutely. Greater than 70% of corporations rely on certifying bodies. These are entities that essentially charge small-business owners to certify that their business is more than 51% owned by a member from a disadvantaged group. Unfortunately, the certifying bodies tend to certify less than 1% of the universe of diverse suppliers. And so in many respects, corporations are shut off from the vast majority of high-potential vendors and firms that could potentially support their work and wish they would be able to do business.

Brancaccio: And overall, it’s not just getting more companies to think about, where do we get our supplies? Are our suppliers more diverse? You want them to thrive. That’s what the end goal of this policy was designed to address.

Burton: Yes, absolutely. You want them to be successful, and you want them to thrive. But what we’re finding is that more often than not, these diverse firms are not even getting a shot. The system is just not necessarily set up for them to be able to even access these opportunities. So much of procurement is based on relationship. And women and people of color have not had the opportunity to accrue the sort of social capital that our white male counterparts have been able to accrue over generations.

Brancaccio: Social capital, like a wider network, so that you know the right person to get the contract?

Burton: That’s exactly right. And so supplier diversity is supposed to be designed to create points of entry, but in many ways, it creates additional barriers because people of color have to go through additional steps that our white male counterparts don’t necessarily have to clear.

Brancaccio: So what would you do? Would you rethink the system set up during the [Richard] Nixon administration? Does it need something structural?

Burton: Absolutely. And I submit that it’d be completely re-imagined. A lot of times, we like to think, oh well, the system is broken, so let’s fix the system. I think we just need an entirely different system, one that actually is designed for a modern era, one that is actually designed to fix the problem, which is lack of access to opportunity for entrepreneurs and business owners of color.

Brancaccio: Once people start talking, where do you go from there on rethinking this whole idea of supplier diversity?

Burton: We need more corporate leadership. We need more leaders within corporate America to say, “You know what? The system is broken.” And we need to re-imagine how we do this better. It’s not going to happen until corporations decide that it needs to be done. The challenge that we see is that entrepreneurs and small business owners, for the most part, are not organized. So they don’t have a lot of power in this conversation. So it might be a “both and,” where we’re talking about building power among small-business owners and entrepreneurs of color. And at the same time, raising up more corporate leaders, both supplier diversity professionals and corporate executives, to say, “You know what? Two percent is not good enough. Five percent is not good enough.” We need to level up, and we need to design the sort of system and model that’s going to enable us to do that.