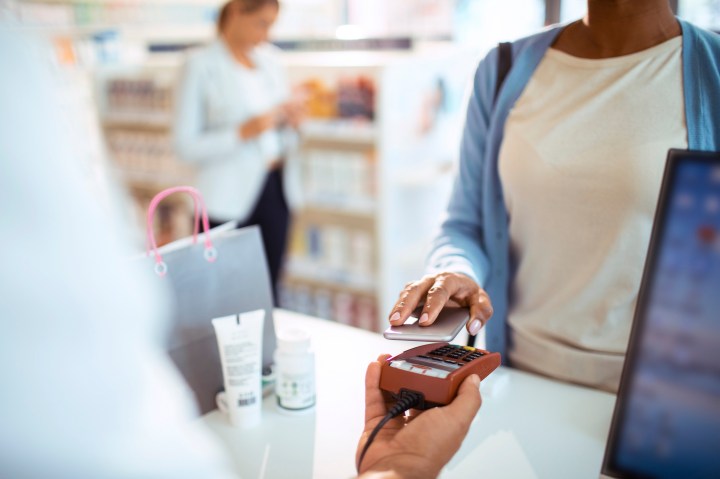 A close up of a customer paying in a pharmacy with her mobile phone. Geber86/Getty Images
I've Always Wondered ...

A close up of a customer paying in a pharmacy with her mobile phone. Geber86/Getty Images

With the pandemic I rarely use cash anymore, and I imagine more people have moved to digital payment methods (e.g. Apple Pay, Google Pay) and tipping more digitally. I imagine there’s more of a paper trail and that more tip income will have to be declared. So my question is: How are digital payments affecting the income and taxes of tip workers?

With the rise of mobile payment systems and in-app tipping options, some workers are seeing less direct cash tips.

The pandemic, which encouraged minimizing interactions with others, has especially encouraged the trend of contactless payments.

But there’s a reason so many employees prefer cash: they give them an immediate source of income and are less trackable than digital tips. (Although the IRS states that all cash and non-cash tips are subject to federal income taxes.)

“A lot of times people who work for tips are working from more vulnerable economic positions, and so having cash on hand is something that is beneficial for them,” said Holona Ochs, an associate professor of political science at Lehigh University and co-author of the book “Gratuity: A Contextual Understanding of Tipping Norms from the Perspective of Tipped Employees.”

Ashley Torres, who started a job as an IHOP server a few weeks ago, said that customers have been using a mix of cash, credit card and Apple Pay (the latter more often than you might think, she noted.)

“I prefer cash tips, just because I get to keep count of how much I’m making,” Torres said.

Ochs said that when tips are digitized, then many people might not receive those tips until they receive their paycheck. She also added that one concern she has is employers seeing those digital tips as theirs.

At companies that have encouraged digital payments, complications have arisen with their systems they’ve implemented.

Back in 2014, Starbucks announced that it would allow customers to tip employees directly from their phone. Now, during the pandemic, the company has instituted a new rule where they tax all digital tips and then add them to workers’ paychecks, according to Starbucks workers.

Starbucks also has a new rule where employees have to declare cash tips they receive on a weekly basis.

Marketplace reached out to Starbucks for comment, but did not receive a response by publication time.

In the past, Starbucks automatically estimated that baristas received tips at 50 cents an hour, and deducted taxes from their paychecks based on that amount, while digital tips used to be cashed out from a register.

Kim*, a shift supervisor at a Starbucks store in Los Angeles, said workers generally prefer cash tips because they are distributed weekly, by hand, to all partners by hours worked.

“Digital tip distribution is dependent on proper time punches being logged, which isn’t always the case by store managers. We don’t see the amounts or how they are distributed. There’s no more transparency there,” Kim said.

Kim explained that tips at Starbucks are distributed between everyone based on the number of hours they worked each week.

“So if time punches aren’t accurate, I can get paid tips for 24 hours of work instead of the 26 I worked that week. So anything like extending a shift 10 minutes to picking up a shift for a no-show can affect the amount received,” Kim said.

Ochs said if corporations receive money, and the employees aren’t paid until later, that period of time ends up costing the worker more money.

“There’s a time factor, and that time factor is more important, budgetarily speaking, to people who are less resourced,” she noted.

However, Laura* — a barista at Starbucks and a bartender — said she sees it as an advantage that Starbucks is now accountable for distributing digital tips.

“I am a barista that helps sort out the tips and divvies them out to everybody in the store. So that’s less money for me to have to handle,” she said.

She mentioned that while she ultimately prefers cash, since it can’t be tracked, there are payments she receives as a bartender through the digital app Venmo that aren’t traceable either.

As more Americans use less cash, we’re likely to see an increase in the rise of digital tipping. Because of the COVID-19 crisis, many businesses may keep the cash-free model they instituted during the pandemic.

The digital payments company Square says that up to 18% of businesses that use its service have gone cash-free.

But while going cashless can create less hassle for some businesses, it can end up creating new challenges — for both workers dealing with the tipping system and customers who don’t have access to a bank account.

*Editor’s note: Some of the names of the workers in this piece have been changed for privacy concerns.