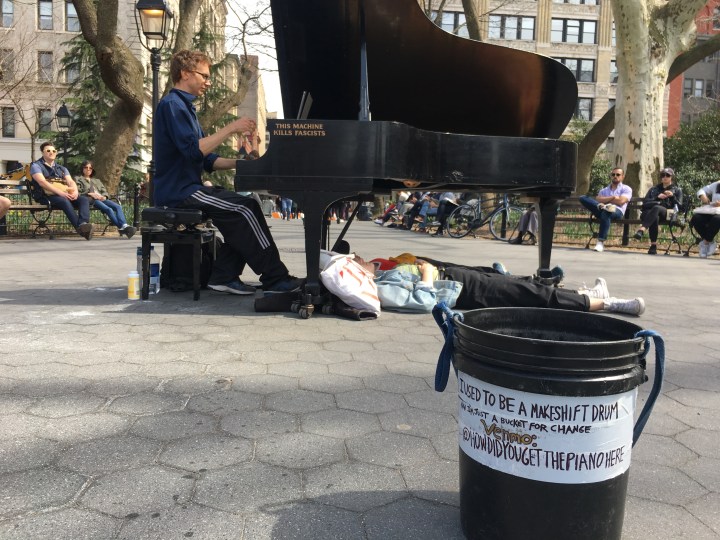 It was a sunny afternoon in New York’s Washington Square Park, and the street performers were out with their tip jars, tip buckets, even an optimistic tip garbage can. For some, asking for money was part of the performance.

A group of acrobatic break dancers prepared for a vault over a line of six people. One performer shouted above the rest, posing a question to the crowd: “We know what you guys is thinking. Why are these guys out here? Could it be for money?”

Building up to their promised grand finale, they pulled out big laundry bags and started collecting donations. They stopped the show and announced to the audience every time they got a $20 bill.

Tyheem and Kareem Barnes lead the group. The twin brothers go by Tic and Tac, and lately cashless spectators have been asking them if they can tip digitally.

Nearly a third of Americans say they don’t make any payments using cash in a typical week, according to a survey from Pew Research Center. Instead, they rely on debit and credit cards and peer-to-peer payments to split a restaurant bill or pay the babysitter. That can affect informal transactions between strangers, as digital payment services were not necessarily designed for these kinds of exchanges.

The Barnes brothers have adapted to the popularity of peer-to-peer payments. They have a poster advertising their account on Cash App, a payment app through Square. They’ve also used a card swiper and recently got a Venmo account. People are using them, but they only bring in around $10 to $20 a week through digital payments, about 2% of their tips overall.

“Cash is always going to be first,” Kareem said. “Street performance was something that was created for cash.”

Plus, managing a handful of digital services for just a portion of your tips can come with some glitches. Tyheem, for example, once mistakenly gave out the wrong account name. Some services have fees, and they usually have to be linked to a bank account.

“There’s really no good solution for folks in the informal economy,” said Bill Maurer, an anthropology professor at University of California, Irvine, who studies how consumers use financial technology. He said none of the payment services we have at the moment can do what good old-fashioned cash can.

“I don’t need to have a bank account to make it work. I just need the cash in my hand and as soon as I give it to you, it’s yours,” Maurer said.

For buskers, there are extra benefits to cash: It’s visible and public. Seeing people tip can encourage other people to give up their spare change. It’s hard for that to happen when your tips are in the cloud.

“I found out one thing is that people, when they tip, they want to be seen tipping,” said Ricky Syers, a busker who’s been performing puppet shows in Washington Square Park for six summers. “They want it to be appreciated. They don’t want it to be missed.”

That was exactly the case for Justin Seitzler, an onlooker with an empty wallet watching a piano player at the other end of the park.

After sending the piano player $10 on Venmo, Seitzler found an analog workaround: He stopped to talk to the musician to let him know.